This is the sort of thing I would usually talk about on my other blog, the one dealing with my father's hoarding and its aftermath. But of course one can't really separate one's life so neatly, and it is all related and intersecting. So I will make this observation here: what we are doing is in large part a spell.

I suppose I should give a bit of rough background. My father was a compulsive hoarder and a mechanic. Have you seen those TV shows? I haven't, actually, because I know I would find them triggering and enraging; but from what I have heard he may very likely be worse than the people on them. Because, no matter how bad they are, the very fact that they have agreed to be on those shows mean they recognize something is wrong with them. For my father? Not so much, no.

For forty years he filled this yard (and the garage, attic, breezeway, and two outbuildings) with junk like whole rusty cars, car parts, engines, tires, scrap metal, galvanized heater ducts, pipes, lumber, boards, milk crates of cedar shingles, cans and jars filled with nails and bolts and screws, refrigerator drawers, wooden drawers salvaged from old bureaus, broken furniture, and on and on and on. At one point there were seventy-eight cars on this acre and a half lot. I wonder, quite seriously, if we have actually had a million bolts, screws, and nails here. I am in no way kidding. How many nails fit in a gallon tin can? And how many of those have we found, and gotten rid of?

So, anyway. What my sibling and I have been doing in whatever time we can spare is to clean this up. (This is only possible, I should say, because my father is now in a nursing home and no longer lives here.) We have already taken a huge amount of stuff off the property. We have made (according to the receipts) twenty-six trips to the scrap yard to get rid of iron, so far (that number is probably a little low, actually, since I don't think we have all the receipts), and taken more than eleven tons.

Yes. Eleven tons. And it has barely made a dent, honestly. It doesn't look very much different.

So back to the Witchy aspect of all of this. Besides the obvious ways in which this clean-up is honoring the Earth (or really, just being decent to the Earth), and the ways in which it is making this bit of land more hospitable to faeries (what are faeries famous for hating? Iron) or the way in which it is more personally connected to my own growth and feeling of freedom, not to mention the whole working out of issues thing, it is also in some very real ways a magical process.

Because it is alchemy. We have been gathering up base metal, copper, brass, iron, and yes, literally lead, and transforming it into gold, or rather, cash. And that is a magical process.

And so I recently took some of that money and bought myself something which really seems quite appropriate, given the author's interest in alchemy and transformation. Can you guess what it is?

Here's the package which arrived today. It was quite large, and very heavy. 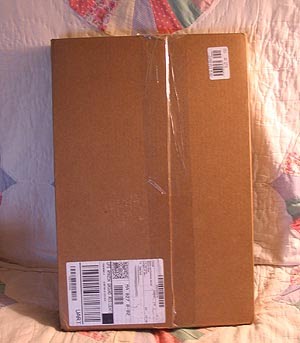 Yes. It's a book. Can you guess what color? 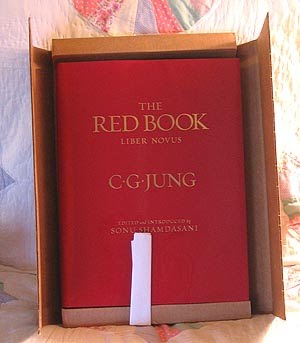 O happy happy. I have only had time so far to page through the illuminated part and read most of the introduction (I had to put it down to help take several stacks of tires to the tire place), but I can already tell it is going to change the way I make art.

Yes!! How wonderfully and perfectly fitting that you should transform hoarded metal into something so marvelous that will inspire growth!

I just blacked out for a moment. You have the Grail of books! *hyperventilating*

Oh, my! Now THAT is good magic. I am quite jealous!

I have a dear friend who is a hoarder and I so wish that I could help her. But what I've learned is that "the" characteristic of hoarding is that no one else can help the hoarder. The hoarder, like Midas, is too much in love with the "gold". Congrats on the alchemy you've worked!

This is so very awesome! Yes, alchemy!

I had a similar experience with my father (only he hoarded different things) and I just had to walk away from it and let others do or not do the cleaning out. Sometimes I wonder if my "daddy issues" would have been easier to deal with over these last ten years if I had been able to stay and face it physically.

Much power and love to you.