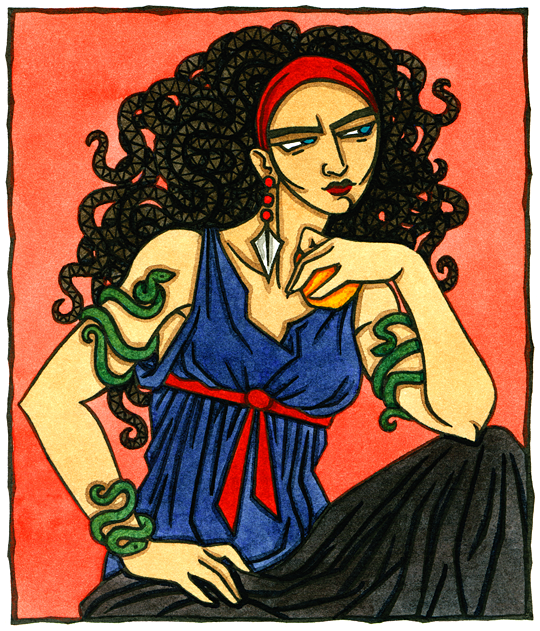 New art of Eris, the Greek Goddess of strife and discord, done for a commission. Her hair is after a description in Virgil (where She goes by the Latin equivalent of Her name, Discordia), where She is said to have "viperine hair ... caught up with a headband soaked in blood." She is contemplating mischief.
Posted by Thalia at 7:43 PM 1 comment:

Here's the black and white of the Hekate of the Crossroads I did for the May Goddess By Request; I've since put layers of colored ink over it. It's more or less done but I'd like to scan the final in again (it doesn't really scan well) and tweak it a little in Photoshop as I'm not entirely pleased with how it came out (I may be a finicky sort, especially when it comes to my own art). But I thought I'd share it in this state, because it does look quite nice. It's in colored pencil (though only the black ones), which, being wax based don't lift up when you layer washes of ink over them. It was certainly an experiment, and though I'm like I said a tiny bit dissatisfied with this one overall I am pleased with the technique and would like to use it again for another piece.

Anyway, though, here She is at a woodland crossroads, with a dense wall of yews behind, flanked by two dogs (Pharoah hounds provided the models, though they don't technically come in black). There is mandrake and henbane in the foreground, and behind Her is a primitive hekataion, which may have had its origins in three images of the Goddess hung on a pole, to act as a protective device at a crossroads. The masks are after Neolithic ones, and I have put Her in Thracian jewelry (the area She originally comes from), though the dress is a bit of a fantastic concoction meant to look like vipers' scales. Appropriate though, I thought. 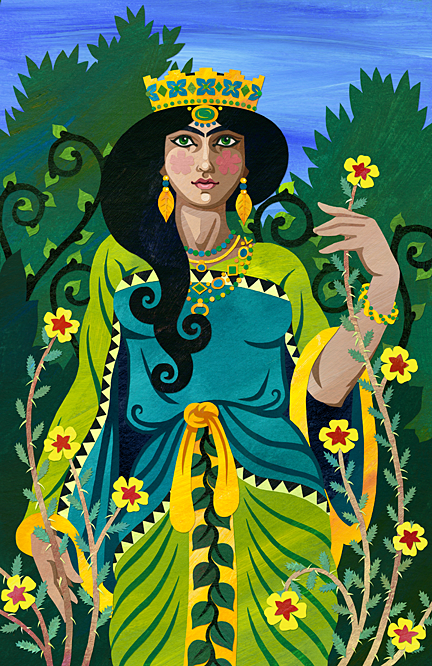 Ameretat, the June Goddess by request, taken from suggestions over on my Patreon. She's one of the six Zoroastrian Amesha Spenta, or Divine beings/Deities Who emanated from the Creator Deity Ahura Mazda; They took part in Creation. Ameretat is the Amesha Spenta of immortality (that is precisely what Her name means, in fact) and long life on the earthly plane. She is also associated with plants, and therefore food in Zoroastrian thought.

The art is digital, to look like cut paper; I painted several large swatches with acrylic paint in some interesting textures, then scanned them in to use as patterns in Photoshop. There are a few reasons I did it that way, both physical and artistic. On the physical side, one) I'm just not that good with an X-acto knife, and two) I do have a little bit of carpal tunnel syndrome, and cutting finicky stuff with an X-acto knife for some reason really annoys it, so I prefer to avoid it. On the artistic side, it's so much easier to tweak colors in Photoshop if needed (in real life you'd just have to start over with a real piece of paper). The different colors are in layers, really quite analogous to the paper layers I'd be using if it were a physical piece, and each have a tiny little drop shadow. I think the illusion is pretty good, though it was definitely a new-to-me sort of technique, and I'm not necessarily real good at keeping things simple.

She's in ancient Persian (Achaemenid) clothing, as that was the main religion of that old Empire; I've shown Her with Persian roses, this really odd-looking type of rose that almost looks like a succulent, to allude both to plants and to food, as roses and rosewater are used quite a lot in Persian cuisine.

I've put Her up on prints here, if you're interested.
Posted by Thalia at 7:58 PM 2 comments: