I have never wanted to be a mother; that is just how I am. I have enough to do in attempting to see to my own needs, never mind those of a dependent child. I am furthermore so introverted that the mere presence of an ordinary dog will drive me up the wall because of its constant expectation of attention.

So when I think about the Maiden-Mother-Crone archetype that middle bit, for me, is just sort of a blank. Even as a little girl I was uninterested in baby dolls. Dolls that looked like little girls, like friends, like me, sure, but ones that were like babies? I just didn't see the point.

So I've never much understood the Mother archetype. Oh I've been able to sublimate it when say thinking about my artwork, or the way I have nurtured aspects of my life. But the direct, hands-on experience of having actual children? No, and no thank you.

Now. You may have heard there is a kitten 'situation' in my yard at present. Without going into too many details (as it's all a long convoluted story) let me just say there are already some Plans in the works involving the local trap-neuter-release people. Because the phrase 'spiralling out of control' does come to mind.

As part of that long story (and if you would like more details I have also written about it at Tetanus Burger), one of the feral kittens out there looked to have been wounded. So I took her to the vet, where it turned out it wasn't a wound after all (which is good, because in my state the rabies laws will kick in if you don't know where a wound came from); instead it was these horrible things called cuterebra.

I know. The Goddess cares for all Her children. All of them. That includes both kittens and parasites. That in fact even includes parasites that squick me right the fuck out. You can google that word above if you're brave, but ai yi watch out for the pictures.

But the vet cleared it all up and got rid of the nasty things; and he gave me some antibiotics and instructions to keep her wounds clean. Said wounds are however rather deep and will take some time to heal, most likely.

So here's the thing. This kitten is just over three weeks old. She is still suckling, and is not weaned. But I'm pretty close to positive that if I just put the kitten back with her mother that one, she'll move them some place I can't find them, and two, that place will inevitably be down in the dirt and rust, which means the wound will never stay clean. And given what that kitten's been through already it seemed counter-productive to just put her back outside.

So I decided to bottle feed her. At three weeks old it's not nearly as much work as it could be; newborn kittens require feeding at three-hour intervals. Still, at three weeks she needs feeding something like five or six times a day.

Any of you who are mothers, does this sound familiar?

Now I know it's not like a human baby, not really. For one thing this stage will not last very long at all and in two weeks or less the little thing will be on solid food.

But still. It's amazing, and crazy. I have to get up at six to feed it, and so there I am measuring formula into a bottle, taking the chill off it by putting the bottle in a bowl of warm water, then measuring the temperature by putting a drop on my wrist. My mother laughed when she saw the bottle standing in the bowl; just like a baby, she said. Well, how else are you going to do it?

I've also started going through towels very quickly. There seems to be an awful lot of laundry all of a sudden. How does that work? It's a kitten, for crying out loud; she's not soiling any nappies, or drooling on her onesies!

It is remarkable how much of this Mother energy, this Mother archetype, is about the very basics. Yesterday I made a chart so I could keep track of how much she is taking in at each feeding, since she needs to eat a certain amount by weight. I bought myself a little food scale so I could see how much she weighed (ten ounces yesterday; eleven today). That chart of course also has a space for what comes out the other end, because that is very important too.

Young kittens can't eliminate waste on their own; in nature the mother will lick the kitten to stimulate it. This means that I've had to gently rub the kitten's butt with a warm damp paper towel until something comes out.

This morning when I looked in the carrier where I've been keeping her, I was happy, yes, actually happy to see a proper turd in there—that means that the kitten is able now to do that on her own. So I was all like, OMG milestone!

Though I'm not sure I'll be winning any Mother of the Year awards. The poor thing is rather a hot mess, honestly, what with the gruesome-looking wounds on her neck and the fact that she's pretty much completely coated in sticky formula because there's just no neat way to do it. I've tried to clean it off as best I can but she does wiggle. Because despite the wounds she is very much alive: she's talkative, strong, fat, and gaining weight, which is good, very good.

And she has learned to purr. Yesterday it came in little fits and starts; today she's got a nice steady rumbling going. She's also started to play, a little, I think, though it's hard to tell; she's pretty uncoordinated yet.

And even though I have no desire to be a mother, here is this kitten on my lap, so small she fits into my curled hand, purring and looking up at me with those big dark eyes. She does, it is true, look a little confused: What's wrong with my ears? Why don't I have fur? Why am I so freakin' huge? But none of that really matters to her, I guess, because I am her mother now.

Here is a picture. It's rather blurry, but you can see how small she is: 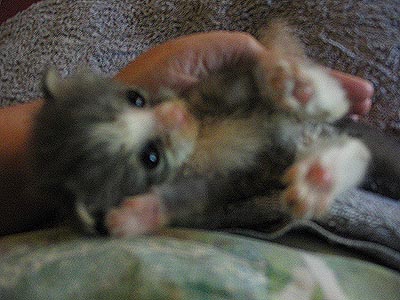