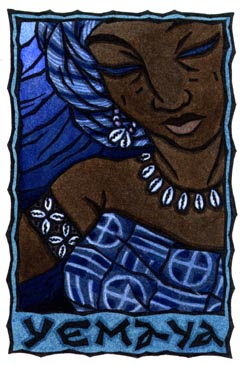 Yemaya is the Yorùbá Orisha (Spirit or Deity) of the Sea. She is a great Mother Goddess and protector of women and children. Her name is a contraction of the Yorùbá phrase Yeye emo eja, which means, 'Mother Whose Children Are Like Fish,' i.e., multitudinous. She is honored in many of the sister religions of the African diaspora such as Candomblé, Lukumi (Santería), and Vodoun (where She is known as Lasiren).

She is mother to many of the Orishas, and indeed is sometimes considered the mother of all living beings.

She is said to wear seven skirts of blue and white, symbolizing the seven seas.

I hear Her say: Let yourself run down to the Sea.

I am nervous, I will admit, about asking Yemaya what She thinks. I am a white woman, after all, and well aware of Neopaganism's oblivious tendency to appropriation; also I am an outsider and do not follow the Orishas myself. But I ask, because it is polite.

You are all my children. I am the Great Mother. The human race was born in Africa; all of your ancestors trace back to Africa. Some further than others, yes, but ultimately all from there. Remember this. Respect this.

Do not think I am not angry, O I am, very much so.

I am vast. I am the Sea. I am the largest thing by far on this planet. My memory is long and lasting; and what you do to me you do to yourselves.

And stop being so damned hard on yourselves, you women. It stands in the way of getting things done.

Labels: Goddess of the Week, Yemaya

Our Regular Schedule Will Resume Next Week

Sorry about that. Some sort of minor disturbance in the Force caused me to miss this week's Goddess of the Week feature.

I actually did pick one on Sunday, Tlazolteotl, and I started writing it all up; but I didn't get very far.

So I think the message, for me, at least, is to continue on the examining health problems. With some forgiveness thrown in for only doing what I can manage.
Posted by Thalia at 5:41 PM 3 comments:

Labels: Goddess of the Week, Wonderings 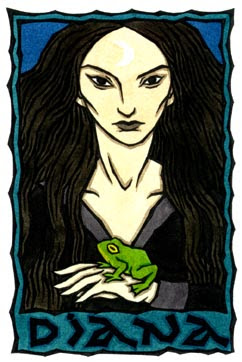 This is the first time Diana has come up as the Goddess of the Week.

I am not particularly surprised, given last week's focus on matters of health. I have Her here as Diana of the Witches, Moon-Goddess and healer, holding a frog, which represents both healing and transformation, or, more succinctly, healing through transformation.

Diana is originally a Latin Goddess, meaning a Goddess of the Latin people, who were to form a good percentage of the later Roman people. She is a Goddess of women, the hunt, wild places, and the Moon; from fairly early times She was associated with the Greek Artemis, and it is a little tricky now to make out the differences between the two.

The name Diana simply means 'Goddess'; it is related to words like 'deity,' 'divinity,' 'deus,' 'Zeus,' and 'diva,' and has at its root the idea of light and shining.

She had a famous shrine on the shores of Lake Nemi in Italy, a lake rather dramatically located in the crater of an extinct volcano; the lake was called in ancient times the speculum Dianae, or 'mirror of Diana.' Votive offerings in the form of terracotta models of body parts, given in the hopes that the Goddess would heal the afflicted part, start showing up at Her shrine in the 4th and 3rd centuries B.C.E.; this was probably part of a larger trend in Roman religion, but does indicate that Diana was thought of as a healer. And like Her Greek counterpart Artemis, Diana was prayed to for an easy childbirth.

So: health, specifically women's health, as Diana is a women's Goddess; also prayers for an easy childbirth.

I will admit I am having a tricky time separating this out, as I am myself currently trying to sort out health issues of my own, and I fear I am looking at all this much too personally. And now, interestingly enough, that is the second time the idea that it is tricky separating things out has come up. So I'm going to take that as part of the message.

So then, this week will still probably see health issues, and digging out the roots of them, as a major theme. Especially women's health issues (not all that surprising as I believe most of my readers here are women). It promises to be on the complex side, and be aware that there may be two strands to it when you had assumed there was only one, and/or that you are more sensitive to something than you were counting on. It is likely leading up to a rebirth of some sort, or a transformation; or, this rebirth or transformation may alternately be the root of it. Dig, investigate, look at it. This is powerful work.

The harvest is still ongoing, and though I don't particularly see it in this card, I feel I should mention it. Something in this is coming to fruition. I suppose, birth is the harvest of pregnancy, as well as the beginning of a new state of affairs.

Daughter. Daughters. Look to the moon, read by that light. Shine that light on things. Not the sun. He is too bright, and you will not see the subtlety of things by His light. But the moon.

The old wild ways, the dark in balance with the light, the light of the full moon shining alone at night; this is the kind of balance to achieve right now, a womanly balance, the balance of the divine woman, female, goddess. Not man's black and white, but the subtle shadows that yet hold a little reflected light within them. The moon is a reflection itself, is it not? My true mirror.

It is more complicated than you think, yes. Also more mine. And more yours, as women. Do not take the easy answers as truth in this case. Daughters, your healing is a little different. It must be whole.

I wish you all (and myself) good grace in untangling these strands.
Posted by Thalia at 9:37 PM 1 comment:

Labels: Diana, Goddess of the Week 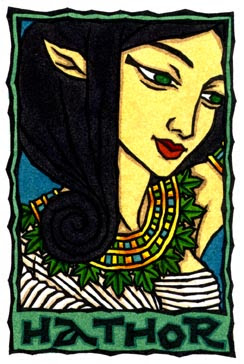 Hathor last showed up just over six months ago, on Valentine's Day. She is a very old ancient Egyptian Goddess Who is older than Egypt, really, dating back (at least) to Predynastic times. She is a Goddess of women Who is heavily associated with the cow as mother and nurturer; various tales place Her both at the beginning and end of things.

Hathor was commonly depicted in the form of a cow emerging from the "Primeval Mound", an archetypal version of the little hillocks of fertile mud left behind by the Nile after it flooded, which renewed the fertility of the land and which the Egyptians took as a metaphor for how the world was created. (Well, one metaphor, anyway.) She was also there at the beginnings of human life, for seven Hathors were said to attend births, acting like Fates or even faery godmothers, predicting the future of the newborn.

And at the other end of things, Hathor was said to wait at the entrance to the Afterlife, by the sycamore tree there; She welcomed the dead to their new home with bread and beer. In this role She was called the Mistress of the West.

In between those things She is a rich and multi-faceted Goddess, not surprising, really, for one so old. She is a Goddess of celebration, dance, music and partying; She is a Goddess of sky and stars; and She is also sometimes said to be the Goddess of revenge created when Ra grew angry with humankind.

I think, given that, that this coming week may be more complicated than you think. This is not necessarily a bad thing, but it means it may take a little more digging to get down to the root of things, or to recognize motivations behind actions, both yours and others. 'Scrambled', actually, is the word I'm getting and I've no idea what that's got to do with Hathor, honestly, but it's pretty insistent. Perhaps it is not knowing whether to declare Hathor's influence as celebratory or bloodthirsty that is causing it. Both, I think, and I don't know quite what that means.

It is complicated, whatever it is. I think it can be ordered and that there is a pattern to it, but gawd help you seeing it at this time. Perhaps trusting is the best you can do, for the time being anyway.

Let's see if talking to Her clarifies anything:

Little ones, dear children: there is one answer beneath it all. It is all related and interrelated. When you can separate cause and effect you will see the roots more clearly. I am here as Mother. I am here as Nurturer. Look after your health this week. Look to things of the body. That is what I know. That is what is basic. That is what a good mother will ask when she sees you--Are you well? Are you eating enough?

I am first and last in this journey of your body. Trust me on this.

What are you feeling right now, in your body? It is a piece of it. It is a clue to your health. Listen to it. Take note. It is trying to tell you something.

Well, that's a little clearer; it's about health. Yes, very basic. So then, this week is about untangling a health problem and discovering the roots of it. Probably also that more that you would have thought is tied into it. It's complicated, true, but if we stop and listen to what our bodies are telling us we can make a start. At least I hope so.

What do you think? I think I will explore what She is saying further and meditate on this.
Posted by Thalia at 10:42 PM 4 comments: