And another, though not an Aztec.  I'd never quite liked the earlier version of Her, so I redid it with rather a different emphasis.  It's tricky to find female tricksters, after all, but Athena absolutely qualifies (if you don't believe me go read The Odyssey.) 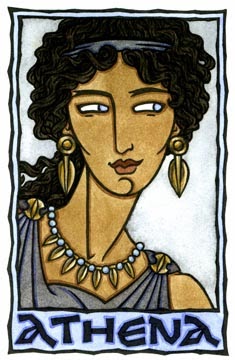 I don't know if anyone's going to pick up on this but I hinted at Her more martial qualities with the bronze jewelry in the shape of spear points and shields (the pins on Her shoulders are specifically Spartan shield-shaped).

As usual, I've put up t-shirts and prints with this art on them, if you are interested.
Posted by Thalia at 7:02 PM 3 comments: 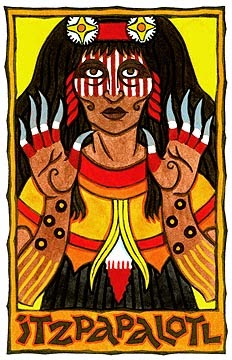 As usual, I've got prints here and t-shirts here with this design on them, if you're interested.
Posted by Thalia at 3:00 AM 4 comments: 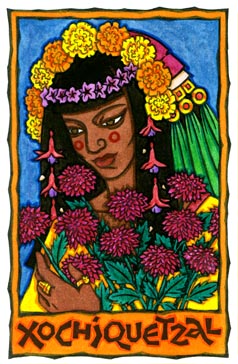 I've put up some prints at my deviantArt gallery here; and some t-shirts over at Printfection here. Enjoy!
Posted by Thalia at 2:06 AM 8 comments: 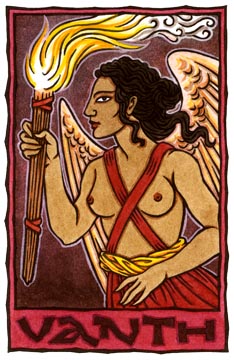 Wow, it's been almost a year since I've posted here. I'm not sure what to say.

It hasn't been busy, so much, at least not on a mundane level; on the level of processing things though I suppose it has been very busy.

And recently, in the past couple of weeks, some things have happened.

The first is that my father has died. He was ninety and had been failing for a long time; he had been in a nursing home since 2006, after a stroke that took away most of his mind. As it was he had had some dementia prior. It was not a surprise, really, his death. Also, before the stroke and the dementia he was an abusive bastard, a hoarder and a control freak who did his very very best to make sure the people around him were as miserable as possible. That sounds harsh I'm sure, but it's true. And I will speak the truth about this.

So I'm not in mourning, not for him. I am in fact quite relieved, and the day after his death I recognized that what I was feeling was in fact freedom, for one of the first times in my life.

But then there's the other thing that has happened, and it is agonizing to watch and to deal with.

One of the cats (there are eight here these days) was looking a bit under the weather a couple weeks ago. For some reason, even though he didn't look that bad it felt urgent, so I brought him to the emergency vet, because they were the only ones open on the Fourth of July.

Turns out Sir Isaac Mewton has a very large mass or tumor in his abdomen.

The local ultrasound person who makes the rounds with the vets here was out of town, on vacation at the time; but the emergency vet (and a couple days later my usual vet) said it's not good. They took x-rays, and even though that doesn't tell as much as an ultrasound would, like for example what it is or what it's growing from, like the stomach, liver, or pancreas, still they could tell it's not good. Even with an ultrasound and knowing what it is, chances aren't good it's something surgery could fix.

So my choices are to track down an ultrasound and based on that decide on surgery, which means subjecting him to another vet ride and procedure and then just possibly surgery. But probably not. Odds are an ultrasound wouldn't tell me anything any better. And he's an oldish cat, twelve years old now. Not very old, but old enough that putting him through major surgery, especially given that he's been sick a while and so weaker than usual, would be a big deal. But most likely surgery wouldn't help.

Or basically let him die, while making him as comfortable as I can, and when the time comes and his suffering is too much, have him put down.

I have sort of opted for the latter. I have no idea if this is the right decision. I especially can't tell if I'm just being lazy or in denial; it's certainly easier to do nothing than something. Though the thought of putting him through a bunch more tests, which he will hate, keeps coming up. I don't want to do that to him. The money, oddly enough, is there; but if I opted for surgery it would still be something like several thousand dollars spent on something that's not likely to work.

I'll also have to figure out, probably sometime soon, where that line of too much suffering is. I have no idea where that is. Right now, though he has more or less stopped eating, he is still fairly perky and alert, and can still follow me downstairs to the kitchen to lick at a little baby food. He's still reacting happily to catnip. It's so hard to tell; cats in particular don't show it when they're in pain. When Ratty had a broken hip, such that the head of his femur was out of the socket, when the vet tried to listen to his heartbeat she couldn't, because he was purring too loudly. (Ratty may not be the brightest bulb, but still, he's a happy guy just by default, pain or no pain.) So I don't know.