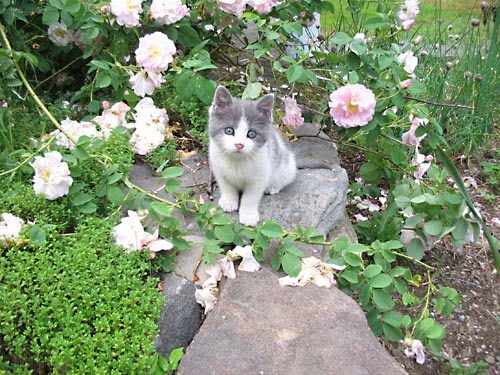 It's either the Beast or the Brigadier. Hmmm.
Posted by Thalia at 9:39 PM 8 comments:

I don't have a lot to say lately, it's true; I am still feeling very blocked artistically, though there is a pressure behind it, I think. I wish I could figure out how to open it up, a little. I fear an explosion if left long enough.

There is a little kitten living in my downstairs garage now. His mother is feral, or semi-feral, and in her wisdom (or Bastet's) she has left the kitten in my care. I have been feeding him, and playing with him, and handling him, and he is as tame as any proper house-cat I've known. That is, in fact the plan; the two house-cats are both over ten years old now, and I like to overlap cats, so it's about the right time for me to get another.

He's met Maude already, several times; she will hiss at him if he gets too close, but otherwise she's content to just sit there with him a couple feet away. She's mellow, though, and has encountered a kitten before (Sir Isaac Mewton). Mewton himself is the one I'm worried about since he can get a little odd. So I'm taking the introductions slowly, and letting the kitten stay in the garage for now, with supervised forays into the cellar and kitchen to get his scent in the house a little, and no contact with Mewton just yet. I've introduced him to ham, vanilla ice cream, and the little plastic ring you pull off the gallon milk bottle-cap; I imagine he thinks it a very fine thing indeed to have me as a friend.

I've been out there playing with him, a lot. He will follow me around out into the back garden, though he definitely has a comfort zone of about fifteen feet from me, and if he gets spooked or uncomfortable he comes running back to sit between my feet.

So that means I've been spending a lot of time out in the back garden, just being there, sitting on the steps to the herb garden, watching the kitten weave in and out of the overflowing damask rose, jumping up on the stone wall, stalking the cricket hiding in the thyme who always stops chirping when he gets about six inches away. And I've seen the ruby-throated hummingbird attend to the kitchen sage in its unexpected bloom, and I've seen the tiger swallowtail on the malva, and the stone wall speckled with bright red spider mites; and it has become a meditation, of sorts, a way of paying attention to what is growing, blooming, changing in my back yard.

I stood there today in the downstairs garage, holding him in my hands against me, while we watched the rain fall. Just quiet, watching, for more than half an hour. He is at his absolute pinnacle of playfulness right now, about six or seven weeks, but he just sat there, looking, unafraid of the lightning and thunder, though it was really quite intense for a time.

A movement caught my eye, down on the floor, though the kitten didn't see it. It was a little brown toad which had hopped out from behind something. I was still enough, and had been for long enough, that he didn't see me. I watched him a moment later as he hopped out into the rain. I imagine it felt good on his skin, and that an amphibian must always be called back to the water, even as an adult.

And I thought: Well I'm a Witch, aren't I? Here with a quiet little kitten and a toad, watching the rain fall.
Posted by Thalia at 12:55 AM 5 comments: