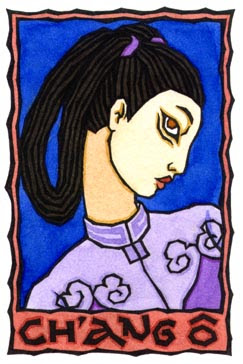 So I took my current homemade working version of the Goddess Oracle Deck and shuffled it a bunch, while asking of the Goddesses: what do You want to tell the world right now?

And up came Ch'ang O, the Chinese Moon Goddess.

After all the talk of gung-ho involvement and Athena-style righteous anger in the last post, this choice struck me as odd. She is the Moon Goddess, in China associated with the hare or rabbit, as they (like many other cultures) see the shape of a rabbit in the markings on the face of the Moon; and She has always struck me as a fearful sort. In Her legend, She comes across Her husband's elixer/pill of immortality and takes it; and when He comes home She flees before Him, terrified of His (assumed) wrath. She runs so far and so fast She ends up on the Moon, which She then makes Her home.

Now, given that I personally am rather prone to anxiety, I have plenty of interpretations of this card and its timing for myself. But for the world?

At first I thought that with the current political situation this was more a time for action and involvement than fear, even if fear is the motive pushing us to get involved; but then I thought about the current economic crisis, something that affects most of us on a very deep level, that of our future prosperity and stability. Will I pay my bills? Will I keep my home? Will I have enough to eat? These are questions of a most basic nature, questions felt down at the root chakra level, and ones that are very much based in fear.

So I asked Her what She had to say to the world right now. And this is what She said:

Perhaps, then, what She is saying is that we can choose to use our fear in these current very scary times to break through denial and do what needs to be done. That this energy is powerful and can be of use. But also, that if we are too frightened to act, not to pass judgement on ourselves. Survival, after all, is key.

To read more about Her go here; to read Her Tale, here.
Posted by Thalia at 7:19 PM 2 comments:

A few days ago Anne Johnson over at the very marvelous (and very funny, a quality this Muse of Comedy namesake can appreciate) Pagan blog The Gods Are Bored issued a call to the Pagan Blog-O-Sphere to blog against the current Republican ticket, as they are not, shall we say, compatible with religious tolerance. Or freedom. Or that little thing called the Constitution.

Now, though I wanted to, I didn't really know how to go about helping with Anne's idea, as I hadn't intended for this brandy-new blog to be of a particularly political bent, rather more of a window into the creative process type of thing. Although, come to think of it, Athena has been my patroness Goddess of late, and, besides being the Goddess of the creative process par excellence She is also all about justice, wisdom, and strategy.

Athene the grinder
shake your spear,
rage against injustice.
Inspire us with the prowess
of righteous fury.

(To quote the R.C. Hogart transmutations of The Hymns of Orpheus.) So, I suppose, not really a stretch, after all.

But as I was wondering Evn over at Lover of Strife, (another very well-written and very funny Pagan blog, that if you haven't already checked out you certainly oughtta as he has at the very least hands down the best blog masthead I have ever seen) who is my very first Devoted Reader, the sweetie, went and got me involved anyway, and gave my Cat and Cauldron store a very lovely plug, averring that my Goddess t-shirts are the fashion statement to be making whilst fighting off the Forces of Stupidity and Intolerance. I am honored. Thank you, Evn.

Now, in accord with Anne's original intent, should you come across this and agree that Sarah Palin is a Witch-hating threat of a most dire kind to religious tolerance and freedom: Tag! You're It. Go forth and blog.

So it is. This I do in the name of my patroness Athena, in Her guises of Athena Promakhos, Sthenias, Soteira, Nike; Champion, The Strong, Saviouress, Victory.
Posted by Thalia at 5:04 PM 1 comment:

This is my most recently completed Tale; as part of the book to go with the Goddess Oracle Deck each Goddess has a Tale told from Her point of view. That was not my intent starting out, not at all, and it is part of the reason why writing this book is taking so long, but They do insist.

This is the Tale of the Sibyl, as depicted at left; though the picture shows the Greek Pythia, the prophetess at Delphi, this tale is after a Roman legend.

One of my grandmothers, incidentally, was named Sibyl. My other grandmother was Clara; one might imagine prophetic powers run in the family.


I came to the King that day as an old, old, woman all in rags, my white hair unbound and tangled. But the dark light in my eyes was fierce, and his guards, two old veterans, saw that and stood aside. And so I came to the King, young Tarquin the Proud.

And he looked me up and down in his common finery, his silver-gilt crown and tunic of blue wool, not from a palace but from his wooden house on a hill; King, he called himself, as if he ruled a great land and a great people. We were sheep-farmers then, really, camping out on a few hills above a bend in a river, banded together to keep the robbers away; still, give him his pride, young Tarquin the King. And he looked at me, and I saw mingled with his disgust displeasure at the incompetence of his guards, but I knew he would not punish them, for there was more wine to be drunk and he did not want to engage in such a nasty business, truly. And he set down his painted cup, and he looked at me, though he obviously took no pleasure in it.

What young, proud man will take an old woman seriously? But something, a bit of humor or tolerance brought on by the wine, something let him consider me. And within that humor, that leniency? Perhaps, just perhaps, a tiny seed of wisdom.

He snorted, and did not answer. Perhaps I was not worth bothering with after all.

And I took out the Scrolls, nine all told, for wisdom comes in three times three. Within them, the lore of civilization, of gods and man; the signs to be read in the flight of birds, proper offerings made and the holy days kept to appease the gods, rituals to found prosperous cities, inaugurate temples, avert evil and cure plague, all within, of course. But before that, and more valuable, they held besides the elder wisdom of goddess and woman and the sanctity of the Earth, the lessons of the dying and the living, of compassion and kindness and balance and true strength. The wisdom both of the Earth and of civilization, all that a King might want, all that a great nation would need. Wisdom beyond price, in nine slim Scrolls. And I held them out to him. I said again:

“What are you asking for them,” he said, bored, losing interest in a common peddler.

I named my price. A price so high he, as petty King of a petty people, would have a hard time scraping it together, though he would be able to, just. I knew this. He did not, and young and proud and in need of wisdom, the young King thundered at me. He nearly threw me out, then, but I caught his eye, and he checked, a little.

“Are you sure?” I said, and then, calmly, irrevocably, I set three of them into the brazier. Dry, old parchment, they blazed immediately, dramatically.

His eyes snapped to hardness, attendant now, the effects of the wine thrown off. Ah.

I held up the Scrolls, six now. I asked, again:

And I named my price again, the same exorbitant price, though there were now three fewer Scrolls.

He did not yell this time, but met my eyes with his own, and they were cold, and proud, and a little fearful now.

And I set another three on the flames, gently, sadly, as one lays the body in a grave. And I saw fear grow in his eyes, though he was a young, proud man. And wisdom, finally, grew out of that fear, that fear of what might be lost, that young, proud men only recognize when it is almost gone.

I held up the last three.

And he paid that price, then, and did not question it.

But it was as it ever has been with Kings, too little too late. And so that great Kingdom, that august Republic, that vast Empire that would rule the world, was only ever founded on scraps of wisdom; ah, what might have been.

It has been, I admit, a bit of a rough year. Various issues, with which I won't bore you, have come up, with the end result being that I have neither worked on the book for the Goddess Oracle Deck very much (the main thing I have to be doing to get the deck itself published), nor, and this is just awful, have I even completed a new piece of art in the last year.

Depressing, I know. And not just for you all out there.

The main purpose of this blog, then, and I'll be right up front about this, is to get me back into writing the book to go with the deck of cards I've given the working title of The Goddess Oracle Deck. That won't hold, of course, given that Hrana Janto and Amy Sophia Marashinsky already have one out by that name (though I note with some surprise that Googling that phrase pulls up my version as the first hit, which is simply crazy).

So I plan to feature regular updates and progress reports on the book; but also I thought this would be a good place to talk about new artwork I create, or new articles I write for that crazy I-don't-know-whatever-possessed-me-to-take-it-on project of mine, the Obscure Goddess Online Directory; and perhaps this might also be a place to feature a Goddess or two I especially like. I'm sure it will become a lot of things, in time.

Anyway, though, that word up top, inaugural. In Roman times, which is where the idea comes from, to inaugurate meant to mark out a place as sacred, a job properly done by an augur, a type of priest responsible for divining the signs; now, I am not an augur, but I like the idea of marking out this blog as some kind of sacred space, if such can be applied to a blog. For I intend this to be, at the root of it, a blog about the creative process; and well, it doesn't get much more sacred than that.
Posted by Thalia at 9:24 PM 4 comments: