Off For A Bit

Just a heads-up that I will be away for the next couple of weeks, and so there will be no Goddess of the Week posts in that time. I should be back the first week of December. Until then, happy Thanksgiving to the Usaians, and happy November to the rest of y'all. See you when I get back!
Posted by Thalia at 6:54 PM 1 comment: 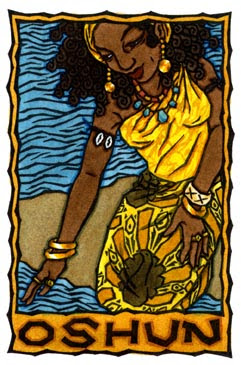 This is the first time Oshun has come up; She is originally an Orisha (Spirit or Goddess) of the Yorùbá people, who are mostly from the West African country of Nigeria (though more than a million live in Benin, also). She is the Deity of the Osun river in Nigeria (where Her name is usually spelled the same way, Osun), and like Yemaya, finds a place in many of the 'New World' religions of the African diaspora, such as Lukumi (aka Santería), where She is known as Oshun or Ochun, and Brazilian Candomblé, where She is Oxum.

She is a Deity of love and beauty who is also concerned with matters of riches and prosperity and abundance, as well as prediction and divination; the eldest of the Orishas, Obatala, taught Her the proper use of the cowrie shells, which knowledge She then passed on to humankind. She is charming, and beautiful, and on the young side, being a bit of a coquette, so I hear; and gold, orange, and yellow are Her colors, the colors of wealth, the muddy river, pumpkin seeds. Five is Her number.

She is called Oshun Yeye Kari, "the Mother of Sweetness," and sweet things like honey, oranges and perfume are offered to Her; as is the pumpkin, both for its orange color and the abundance of its seeds.

She is about both sweetness and healing; and She has a bit in common, it occurs to me, with Kamrusepas, that Goddess of the Hittites Who heals with honey and fruit and sweetness.

When I first picked this card it struck me as personally rather incongruous, because I would not say I feel life is very sweet right now; in fact much of my personal work lately has been about acknowledging and accepting a great deal of anger on my part. And then I thought about how my surroundings aren't exactly infused with sweetness at the present time either, and, well, I got a bit cynical, which is never good for helping one feel sweet.

And though of course these readings are not really for my benefit, it takes a bit to see through one's own filters, as ever; and so the question that came to me was how does one find sweetness when it is not around you? If your environment isn't sweet, then what?

The answer as always is to look within yourself. If they can't provide you with it, you can at least give it to yourself. You have to start there anyway.

So, this week, look to how you can be kinder, sweeter, to yourself, regardless of how bitter your circumstances might feel, and without discounting or invalidating your own anger or bitter feelings. It's not that dealing with anger is not important work, if that is where you are; rather that a break is much needed and can help you get perspective. Perhaps it might be good to put it down, for a little while.

This week think about how you treat yourself. Honey, we call our sweethearts--what if we took a week and used that name on ourselves? What difference would that make in how we looked at our actions, our thoughts, and how we treat ourselves? How can you treat yourself with sweetness?

I ask Oshun if She has anything to say to us, and She says:

Flow flow flow, slow and smooth, like gold, sweet sweet honey, sweet sweet water; let it all flow. Just let it, no pushing; it will find the way. Water always does. Let it carve out the path of least resistance and greatest beauty, the sweet sweet waters. Flow, flow, flow. Just let it be. It will find its way. You will find your way. Down, down, downhill to the Sea. All is well. All is golden and lush and sweet. See your face reflected in the setting sun, down, down, sunset reflected in the blue Sea. Let it be. 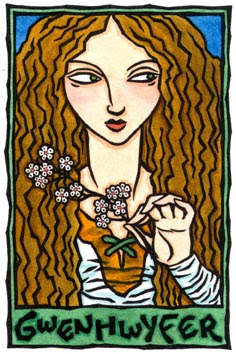 Apparently we are on Southern Hemisphere time this week, since this week's Goddess is Gwenhwyfar, Who I've depicted here as the quintessential May Queen (and yes I've spelled it wrong on the card). But it is a little odd to be looking at Her up here in New England, since we are now in the starting days of grey miserable yucky November (can you tell it is my least favorite month?) and are still in the season of Samhain, of death, decay, and the thinning veil.

However Samhain and Beltaine have more in common than one might think. The veil is thin at both times, though Samhain favors ghosts and the dead while at Beltaine it's more likely to be the faeries coming through. Not too surprising, really, when you consider that even though from one location the holidays are at opposite ends of the year, from the Earth's point of view they happen at the same time.

Gwenhwyfar last came up both the first and second weeks of May, at what would seem a far more appropriate time, given Her connection with the idea of the sacred marriage. Called Guinevere in the Arthurian legends, she is the wife of the great King Arthur, and famous for having an illicit affair with the best of his knights, Lancelot du Lac. ("Du Lac", incidentally, meaning "of the Lake" because he was brought up by the otherworldy Lady of the Lake, Vivian.) Her origins have mostly been forgotten but may well lie in an old sovereignty Goddess Who embodied the land; and there are hints of a Divine origin for Gwenhwyfar, here and there.

And I know all this, and you do too if you've clicked on the links above; but I was still having an impossible time figuring out why She might show up now when Samhain is just so strong up here, aside from the lesson to remember that opposites contain the other (Samhain/Beltaine), or that the northern hemisphere isn't the only one the globe possesses.

Then I remembered Her name.

And I think of those other Celtic sovereignty Goddesses, like Epona, and Rhiannon, and even Blodeuwedd, Who embody the land; and each of Them has Their winter, Their dark, chthonic side: Epona is held to be a psychopomp, a Soul Guide Who brings the newly dead to the Otherworld; Rhiannon's first husband, Pwyll, was the King of that land for a time; and Blodeuwedd, though made from spring flowers, has as Her emblem the owl, that lonely haunter of the night.

And what is under there, then? It is hard to tell. Gwenhwyfar's, Guinevere's, story as we know it now has been so thoroughly interwoven with a later set of rules it is hard to know which threads to pick; I had never understood, for example, why, once Arthur was killed, Guinevere never married Lancelot, and instead chose to become a nun; I had thought that it was some kind of strange strict Christian morality play (which it may well be), but now I see that given the underlying logic of things she cannot marry Lancelot. For if she does, he becomes King. And the story, being that of greatness and glory irretrievably lost, is such that it must end.

Perhaps that is the thread. When Arthur first meets Guinevere, Merlin warns him against the marriage; and indeed the Queen is often indirectly (or directly) blamed for the fall of Camelot because of her affair with Lancelot.

I can see her flickering at the corner of my vision, now, stopped in a doorway to glance at me, before She is gone. She is all in white. This time is a threshold, is it not?

So I ask the Goddess as always, What do You have to say?

White am I, like hawthorn, like snow. I am white, white as ever I am, as white as apple blossom as white as bone, both, as I always am and always have been. As I am ever I, all of me, the White Lady, the Great Queen, the bone-white Mother, the white shadow of the land. I am all these things, these are all myself, one I, the horse carved in the chalk, winter's water overrunning summer's settlement, the white at the heart of the dark, the white you cannot see, the bone hidden within the flesh and the body that does not see the light of day whilst one lives. Except in bared teeth, that is, and that is a clue to my nature; it is the white smile of a gentle lady, and the knowing grin of the skull. This is nothing new; I am surprised you have not learnt it by now.

Remember both. Like Samhain and Beltaine happen at once, I am at once both, and so thoroughly both it is only one thing. My left hand and my right hand, identical and perfect and mirrored. If you look now you will see them both.