I went and made a facebook artist's page, here. Come 'like' or 'follow' it and get updates on new art and what I'm up to with my various business-type endeavors.
Posted by Thalia at 9:11 PM No comments:

The next two in the series; this brings the total up to eleven little Greek Goddess paintings, out of twenty-four, one for each letter of the Greek alphabet. One more and I'll be half done!

The first is Pandia (Πανδια). She's the daughter of the Moon Goddess Selene and Zeus, and a Goddess of light (perhaps of the full moon, specifically). Her name means either 'All Bright' or 'All Divine'. 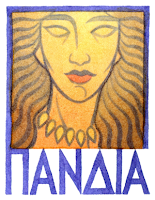 The most recent one is Brizo (Βριζω). She's a Sea Goddess who protects fishermen and seafarers, and She was especially worshiped on the island of Delos. She was said to give prophetic dreams. 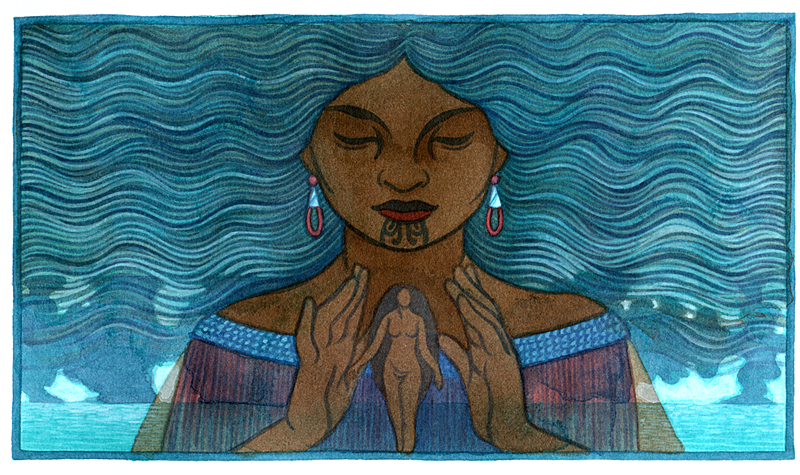 New art of Ārohirohi, the Maori (New Zealand) Goddess of mirages and illusions. She is credited with creating the first woman, Mārikoriko, whose name means 'Twilight'.

I've done it in colored India inks, like the recent little Greek Goddess paintings; I've given Her hair in waves like heat, with the Fata Morgana behind Her. The Fata Morgana is an illusion or mirage formed by light bending through layers of differently heated air making objects such as ships or coastlines which are below the horizon appear above the horizon. She is wearing traditional Maori clothing and earrings and has an appropriate chin tattoo.

She was done as the Goddess by Request for November over on my Patreon. Rewards start at just a dollar a month, with different tiers receiving different rewards; for example for just three dollars a month you can tell me what to paint! I am also still taking commissions for Goddess art.
Posted by Thalia at 9:06 PM 2 comments: 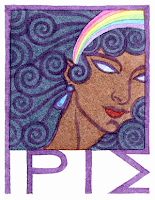 Another one of the small ('smol') ink paintings of the Greek Goddesses. I'm aiming to do one for every letter of the Greek alphabet; I think they'd all look good gathered together on a poster. Or individually on cards. There's something very satisfying about the compositions of these little things.

This one is Iris, the Goddess of the rainbow Who is also messenger of the Gods, especially of Queen Hera. She's portrayed as fleet-footed and winged; I've given Her stormcloud hair, raindrop earrings and a rainbow for a headband.
Posted by Thalia at 8:53 PM 1 comment: