Art Every Day Month is always (well, okay, this is only my second time at it) kind of a mindfuck, honestly. Or at least it is given the way my mind works. I am a recovering insomniac and my productivity generally takes place in the wee hours. Which means I'm usually one of the last ones checking in at Leah's site and I feel like I've missed out on the discussion, or that I'm hopelessly behind and a disorganized loser or something.

I know. I'm just stating it. I do recognize that that's pretty silly. Also, dammit, I'm just not good with the pressure. Not, mind you, that I'm giving up on this already or anything; just that, as usual, I have to adapt the 'normal' way of doing things to my own deeply, deeply idiosyncratic brain.

I am finding the same thing happening that I did with the Goddess of the Week posts; that having an audience means I censor myself and am unwilling to, well, even start. I suspect I will just have to ignore that. I'm not sure what to do about it but the word 'freestyle' is coming to mind.

So with at least the scheduling issues in mind, I'm going to try something. It is ridiculously early by my usual schedule (it's not even 10pm here!), and I've already made something, which I will post below. I will try, also, however, to do something else, and post that tonight as well. But it will be after midnight and so will actually be tomorrow's entry. So that will put me a day ahead, which sounds (from here) to be lovely and relaxing, and should help relieve that feeling of pressure which is making me crazy. (Well, marginally more so than usual, ha.)

So. This is what I did today, for Art Every Day Month:

I still don't really have a lot to show. But I cut out some more grey squares for my Hallowe'enish nine patch quilt. Then I laid them down, and put my glasses on (that last part is important). Because once I could see them I was no longer so sure about the colors. So I cut out some of the plain grey cloth I had, and laid them down too. I think they are too dark. The effect is not what I want, really. Here's a look: 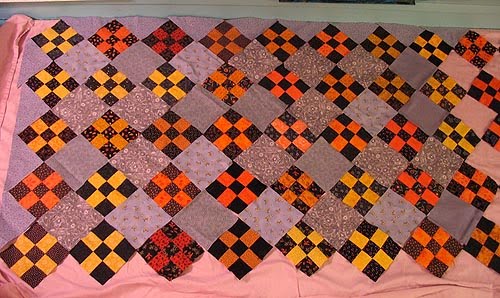 I corrected for color in Photoshop, but it's still a little on the magenta side, especially on the left.

The thing with grey, I am finding out, is that it has to be dead-on neutral (or ever-so slightly brownish warm) to read as grey. Even a little bit of blue in that grey means it's reading just as blue, especially in contrast to the orange, which is complementary and so tends to push it over. So I think I am going to have to just go with a solid ash grey, and one that is lighter than the solid I already have. Probably; this project is now in a stage where some mulling needs to be given space to happen.

You know, once in a while when I tell an artist acquaintance that I make quilts, I get a mocking response (honestly, usually from a dude artist). So I tell them what I have found to be absolutely true—that I used to think I knew a thing or two about color, and then I tried to make a quilt.

Because you are not only using other people's color choices and are not mixing any colors yourself, but you are also using patterns, which 1) do incredibly unpredictable things when placed next to each other, and 2) look entirely different whether viewed up close or from a distance. It is baffling and marvelous both.

So anyway, I'm going to put this particular quilt aside for the moment (at least until I can get some of the right color grey cloth). I don't know what I'm working on instead though. I'm sure I'll figure it out, though.
Posted by Thalia at 9:51 PM

Grey! Who knew it was so finicky?

This is my first visit here. I found you through AEDM. I too have insomnia....I think....or is it that I just like to stay up all night because it is quiet and I can get stuff done?
Anyway..I use your post early and get it out of the way early method. I also post on three different blogs so it keeps everyone guessing. Especially me....I actually think I am one ahead. who knows....
So nice to meet you
Marianne
sorry to use so many "I"s when I should have been talking about U.

Any artist friend in doubt about quilting should go and see an exhibition... My Mum got in to quilting and took me to a few when I lived at home, I was always in awe... One day I might pluck up the courage!