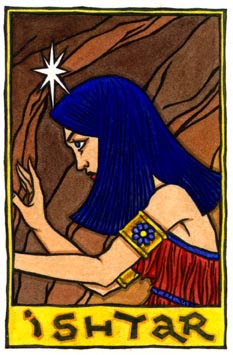 Well, I was wrong. I thought for sure it would be Kamrusepas again!

Instead I picked a different recurring Goddess: Ishtar, the Babylonian Great Goddess of Love and War, Goddess of the planet Venus. She came up just over a month ago, in a February 22nd post. She is a later version of the Sumerian Inanna, seen through Babylonian eyes; and similar stories of Her descent to the Underworld are told.

As Goddess of both Love and War Her character is properly one of contradiction; though perhaps it is simply that She is a Goddess committed to passion. Her somewhat bipolar nature is also related to the fact that Venus can appear in either the morning or evening sky. As the morning star that marks the beginning of the day, Ishtar is war and hunting Goddess; but as the evening star She is the Goddess of love.

I have shown Her here at one of the gates to the Underworld, making Her way with determination into the deep and the dark; and She carries a little bit of the light of heaven with Her, shown as the Star above Her head. I painted Her hair in deep ultramarine blue, a pigment originally made from ground lapis lazuli, a precious stone associated in the Near East with the Gods.

At second, though, I wonder if it's not more of a call for balance. After all I am only picking one a week so there are never two chosen at the same time, never a two-card reading to balance out. Perhaps the overall message here is both to be kind to ourselves and to honor our anger. And perhaps the latter is a part of the former.

I don't know. It is difficult as always for me to separate the personal message from the general; and it's true that this is what I have been working on lately, honoring my anger, taking it seriously and acknowledging it, trying to listen to it with compassion as a way to validate my feelings and be kind to myself. For me, anyway, I am learning that I can't get to forgiveness or peace if I am only skimming over my own negative feelings. They must rightly be acknowledged, without judgment, as the proper first step.

Balance, perhaps, is what this is about; a strong theme of anger followed by an equally strong one of kindness, reminding us that we are capable of holding both at the same time, and that the two are not mutually exclusive; and that, most importantly, they may in some cases be the same thing.

What does She have to say?

Descent, also, you forgot descent; this is a journey we are all making. Accepting your anger, claiming your strength is a journey into the dark, an unburying of treasure, new life brought back from death; and it is spring, which describes life-from-death exactly. Accepting your anger with kindness to yourself is transforming dark into light; instead of turning against your own strength you are accepting it.

Always, even in the dark, you have that little bit of light that belongs to you, that you bring with you. Always, always. Never alone, never without that little spark that will save your life. Some of the most amazing things are found in the dark--have you seen that crystal cave in Mexico? Not just dark, but underwater too, Apsu's realm, the true primeval matrix.

There are great wonders there. Why do you think I went?

Thank you for sharing these beautiful words! As much for you as me, as much for me as the world. I tried to explain such balance on Sunday to my fellow Unitarian Universalists (how's that for a name that encompasses both one and all) and ended up crying at the altar. So much fear right now, and so many people being afraid AND true AND decent, all at the same time. So many dark descents, so many lights, small candles and big Stars. Blessed be to it all.

These two past weeks have been ones of looking at stars in the sky and descending as well...

Weeks of true transformation in my life.

Awesome, and very very appropriate, at least from a personal perspective. I've been riding the roller-coaster with issues of anger and acceptance these past few months and trying my damndest to find some kind of balance.

Also, March 29th was the Babylonian festival of Ishtar!! So it's incredibly fitting that She'd come up on that day :) (see http://community.livejournal.com/goldenmystery/361102.html)