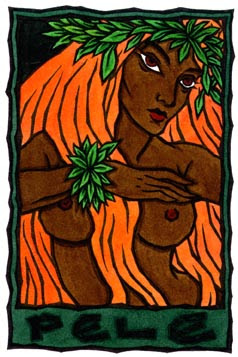 Pele is a powerful Goddess of volcanoes, fire, and the dance in Hawaiian mythology. Her name probably means "Lava," and She is said to make Her home on the island of Hawai'i itself, within the crater of the volcano Kilauea, which may well be the most active volcano on the planet. She is reputed to be of an appropriately fiery temper, and can take many forms; and She is still accorded a great deal of respect.

Pele is usually said to be the daughter of the Earth Goddess Haumea. She is one of many brothers and sisters, though Her favorite is Her youngest sister Hi'iaka, the Goddess of hula. Given Pele's passionate ways, however, She frequently quarrels with Her siblings; and even She and Hi'iaka do not always get along.

In one tale Pele is driven from Her home on the island of Kahiki (perhaps Tahiti), after She (successfully) seduces the husband of Her older sister Na-maka-o-kaha'i, the Sea-Goddess. So Pele goes to the island of Kaua'i, in the northwest of the chain of Hawaiian islands, coming ashore to thunder and lightning. But when She digs a hole in the earth to make Her home, Na-maka-o-kaha'i quickly floods it; and Pele is forced to abandon Kaua'i, moving on to Oahu. But on Oahu She is again thwarted by Na-maka-o-kaha'i; and so She moves on to Maui, where the same thing happens. Finally She comes to the island of Hawai'i itself, where She is able to build Her home inside Kilauea, which is too high for Na-maka-o-kaha'i to reach.

Interestingly enough, Pele's journey follows the order in which the islands were created, as the Pacific plate moves slowly across a hotspot in the earth's crust.

In looking things up for this post I followed a link to the US Geological Survey's web page on Kilauea; and I was bewildered and amazed by the photos there, of that wild and uncanny beauty of that most active volcano, this living Earth, which looks so deceptively like an alien world, though it is not.

Take my advice and go. Spend some time marveling at the photographs there, at the pahoehoe lava flowing like quicksilver, at the deep glow of red beneath it. And look at the maps of the recent lava flows; see how the black line of Highway 130 abruptly ends now.

Here are some to get you started.

I don't know what to tell you about this card. It is a raw and primeval type of creation that Pele brings, one that always goes hand in hand with a powerful destruction. It is something that cannot be controlled or stopped; and I can't think of any other sane approach except one of awe, respect, and honor. Along with the warning that though it is tempting to think of volcanoes as something from another planet, of something safe and far away, not to be found among us humans, they are most decidedly not. Kilauea swallows things whole, streets and houses and volcano visitor's centers; and it is dangerous to think one can get comfortable with this sort of thing.

I don't know if one can work 'with' Pele; or at least I would certainly not advise it. She is a force of nature, and Her rules must be followed to the letter. Even then, there are no guarantees. Perhaps that is the message.

I don't know what this card means for this week. All the ideas I'm getting are of things that are way out of our control; and I don't know how to relate it to a personal level, or what kind of advice to give. Perhaps that is just it, that some things are simply out of our control, because they are so much bigger than we are.

As to what Pele says to us, frankly, I am afraid to ask. But as if there's any stopping Her:

I am here and I will be heard. Burn away the chaff; it is all chaff. Burn it all away! Become new, raw, powerful, healed, cauterized. Let your anger flow, and flow, and flow. Then, let it cool. Let the seeds be dropped, the pioneer seeds, those colonizing new thoughts. Let it be. Let it be both anger and calm. One will follow the other. I am not always erupting! And, truth be told, the constancy of my lava flows mean that I rarely explode in a catastrophic manner. I take back what it mine, true, roads and houses and your little built things, but you must be reminded you live on borrowed land. It is not yours to own, and your built things are never permanent. And borrowed time. Live, and adapt, and embrace change. It is all there ever is.

Good grief. What do you make of all this?
Posted by Thalia at 10:05 PM

I feel a bit irreverent saying this, but in light of Pele's message, I can't stop thinking about an old xkcd strip:

We are about to enter the new zodiac year. So I think we are in a movement of letting the last things of this present year flow.

I feel that lava as it destroys it creates a new landscape.

Evn you are too funny for this early in the AM. And, yes, irreverent!

Strangely enough, I was already thinking this morning that no one makes it out of here alive... Not that that's helpful in any way.

But for me, it's oddly comforting.