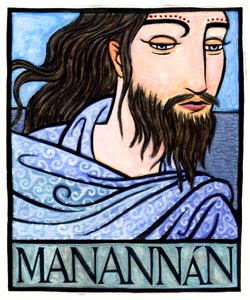 Well, no, it doesn't make a whole lot of sense for a Pagan to be celebrating the guy who converted the Emerald Isle, does it? Rumor has it that this day has been semi-officially reclaimed by one Anne Johnson for Manannán mac Lir, a.k.a. Little Manxman Son of the Sea, who, despite the name, is actually an Irish God (though maybe it's close enough to make no nevermind, I don't know). And why fancy that, I already have a pretty picture of said Sea-God; so, count me in!

(Should any of y'all like to spread it around, you are free to use the above picture, if you like, on your blog or site. Just credit me.)

Edited to add: oh I can just see it now! Round sugar cookies with sea green triskeles piped on top in frosting! I suppose, though, the green beer phenomenon is too entrenched to change. Ah well. It's not like I drink the stuff anyway. What else could we serve at a Manannán mac Lir party?

And edited again: I am reminded that it is also the Liberalia, the Roman holiday to the Deities Liber and Libera, Who are Deities of fertility and the vine (Liber is often associated with Dionysos). They formed a triad with Ceres, the grain Goddess, and all three had a temple near the Circus Maximus.
Posted by Thalia at 7:08 PM

lol Perfect. I wanted to talk about St. Pattie's Day on my own blog, so I conveniently added the whole thing of Manannán Mac Lir Day into what I wrote.

I LOVE the idea!!!! :D I already liked Anne Johnson (I follow The Gods are Bored) but I like her even more now that I know she came up with this idea. :D

You know what? My soul likes a party. If people are having fun, I want to be there a have some too. My friends come from every walk of life and their religious views/living philosophies are very eclectic. I like that. I like mixing it up, even if my tendencies get me dirty looks every now and then, and again.