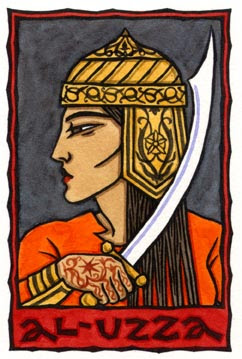 Al-Uzza is a Nabataean and Arabian Goddess, one of a triad with the Goddesses Allat and Manat. Her name means "the Mighty One" and She was most likely the patroness of Petra in Jordan, that fabulous Nabataean city cut from the rocks. She would appear to have been the main Goddess worshiped there, and though Allat (Whose name just means "the Goddess") was also widely worshiped from the Yemen to Palmyra, She is uncommon in Petra itself.

A lot of times, in books not specifically about the Nabataeans, Al-Uzza will be mentioned briefly as a "pre-Islamic maiden warrior Goddess," but I'll be honest here. I know more now. Ten years ago I depicted Al-Uzza as just that (in a ridiculously anachronistic outfit to boot); but I don't know now if that can really be supported.

Now, in books that go into somewhat more depth, She is said to be the Goddess of Venus as the Morning Star, sometimes in a pair with the God al-Kutba as God of the Evening Star; and I suspect someone somewhere assumed Her attributes must then be parallel to Inanna/Ishtar, Who can be a War-Goddess. Now, they are all Semitic Goddesses, it's true, but I'm not sure how far the parallel can be taken. I don't know. I can make better cases for Her sisters in the triad, really--Allat was associated in some cases with the Greek Athena, and Manat, as a Goddess of Fate and Justice, had two swords dedicated to Her in the time of the beginning of Islam.

It is tricky, I admit, to separate Al-Uzza from Allat, as their attributes tend to overlap and shift given geography and time; and also, please bear in mind, I am no expert and am not a scholar, just a well-read amateur.

That said, it is generally accepted that it is Al-Uzza represented by the much eroded statue given place of honor center front on the Khasneh at Petra. (The what? you ask. You've seen it, trust me. Have you seen Indiana Jones and the Temple of Doom? You know that fantastic rock-cut building with the columns and odd broken pediment which dramatically comes into view at the end of a mile-long, 300-600 foot deep chasm? That building.) Though quite worn it is possible to make out that She carries a cornucopia and patera (offering dish), indicating a (probable) association with Tykhe, the Greek Goddess of Fortune, Who was also invoked as a protector of cities. There are also images common to the Egyptian Isis on the pediment, which may argue for a further association for Al-Uzza; though the Greeks mainly identified Her with Aphrodite (perhaps due to the planet Venus association).

So. It is not unusual, I think, that Al-Uzza has such a wide range of seemingly disparate associations, given that She was one of the main Goddesses (in some locales the main Goddess) worshiped by the Nabataeans; also, Isis was linked with both Aphrodite and Fortuna (the Roman name for Tykhe) in Roman times.

I was not at all sure how to interpret this card, given that I no longer know what it means, or if the picture I drew is even appropriate (a similar problem, I admit, is what is holding me up on the Benzaiten entry for the book, since the more I learn about that particularly complex Japanese Goddess the less I think my art is appropriate); but then it occurred to me that maybe the picture isn't the message.

It is always amazing to me, though perhaps it should not be, that certain 'themes' seem to pop up simultaneously and independently across the Pagan Blog-O-Sphere. Late last summer it was the observation that the veil was thinning far earlier than usual. Perhaps it is because we Pagans are more open to seeing that sort of thing, or more open, anyway, to acknowledging that we see that sort of thing. And perhaps it is a lack of faith on my part that this surprises me. But this last week or two the theme I keep seeing is a re-working, or re-thinking, or re-evaluating, or a crisis of faith when it comes to religion, Wicca specifically. (Dear Dianne Sylvan's most recent post is really bringing this home to me.) And I can't help but think it is all a symptom of a change--a big change--coming our way. Now, sure, on Tuesday Barack Obama will be sworn in; but this feels, to me, anyway, to be a more general heightening of awareness, and the inauguration is just another effect, not a cause. Something is shifting.

And pulling this card, a picture of a Goddess I surely would not paint in the same way now, I feel it is telling us that now is the time to let go of old ways of thinking, to commit to some deep reflection on what no longer serves us; and to, most importantly, be flexible enough, and forgiving enough, to admit it to ourselves.

I almost forgot. What does She have to say about all this?

Change is sudden and clean, like the edge of a knife or a sword's edge; clean and cutting like the light of the Star through the dawn. New day, new way of life, new everything; do your best to make it clean so it heals well. Also, love: deep love. I watch and protect; and I am far greater than you imagine. I am the Mighty One, after all. I am very strong.

What do you all think? Do you feel this change, this shift, as well?

Here's my original article on Al-Uzza; though I don't know about the Warrior Goddess bit anymore, it's still pretty sound, I think. Also, here's the link to a much more recently written article on Al-Uzza, Allat, and Manat, though I still have Al-Uzza down as a Warrior. I suppose it will take completing the Nabataean section of the Obscure Goddess Online Directory to get it straightened out, if then. Until that time, I fear I must say please don't quote me on it.
Posted by Thalia at 1:24 AM

Your card is mesmerizing. It's ancient and modern at once. It's brilliant. Your analysis is thoughtful and well-read. Nothing amateurish about it. :)

To answer your question, I do feel the shift, and it's a great one. People are being optimistic almost despite their circumstances. There is a great movement of positivity and growth that is blanketing the world. Hopefully, it will affect change. We are all certainly due for it.

Hmmm. I don't mean to sound dramatic or foreboding, but I keep thinking this change involves Tower energy (meaning the Tarot Tower). Things broken up and the parts (blocks, actually, fancy that) examined and evaluated. Perhaps what She is saying about trying to make the cut clean is that it is easier to heal after letting something go than it is to heal if it has been torn from you, and that our attitude towards things will be a big part of how well we weather it.

I do think the Obama thing is giving people a lot of hope (I say this somewhat cynically, convinced that a lot of it is simple relief that that Idiot in charge will be out on his ass very very soon); also I wonder if that story about the plane going down in the Hudson has something to do with it. I keep reading about that one and marveling at the calm, correct, and above all smart decisions made and how the procedures in place worked. In the back of my head I think it is being held as a model of how to deal with a bad situation. I mean of course luck was definitely with that crew; still, it's suffused the general atmosphere I think with the idea that sanity and smartness are the way to go.

Rambling. I got very little sleep last night, and I hope that makes some sense.

Putting Al-Uzza with Aphrodite gives me a good perspective, since I love to think about a "war-y" Aphrodite, the lover of Ares... it makes complete sense to me!

This is a historical week for the world. Here in Brazil we are, too, following the inauguration preparation and I have to say I will be watching it tomorrow from CNN... I think there are high hopes in all this process...

I feel this is a moment we put ourselves out there... Facing the world... Good luck to us all!

Funny story. This week I was assaulted by two guys. And I fought them. I got a bit hurt, but one of them is in jail. I totally saw the Lady of Battle and, as for things that have changed in my life... I can say I saw The dance of this Goddess in my life. Neatly and perfectly.

Good God, Pietra, are you all right?

What I would like to point out in all this thing is that I SAW the Goddess Al-Uzza there, with me, you know?

This week was life changing... Hope tomorrow we get something lighter, LOL

That's amazing, Pietra, and glad to hear you are doing okay. She'd be a solid ally, wouldn't she, the Mighty One?

But yes, agreed; something lighter would be nice!

And there are people who dare say they think Gods do not exist... humft...