I have been doing lots of creative things this last week, including some art, though I can't really show it right now as I don't have access to a scanner (my sister is "borrowing" it; "borrowing" in quotes since, after all, it is hers).

Those inertial blocks I started got hung up for a time, stymied by the ridiculous fact that I didn't actually have any newspapers for papier-mache; that has been fixed, courtesy of a stack of free car-advertisement papers swiped from the local grocery store.

I have been keeping track, quite faithfully, and I have to say keeping a Creativity Log has been one of the most phenomenally helpful things ever, for it is making me confront, and see, all the myriad creative things I do.

One of the things I did this week was play around a bit with intuitive drawing, though I'm not sure I like the results.

The main piece I did, though, was something I'm quite pleased with, though I feel sort of vaguely guilty about it too, which is ridiculous. After picking Al-Uzza for Goddess of the Week a couple of weeks ago, and realizing just how dissatisfied I was with the original art, I succumbed to temptation, and did another version. This is something I've been trying to avoid, because I most decidedly suffer from the Tolkienesque affliction of never being able to leave well enough alone, as far as my creations go. If I let myself, I know I would be forever going back into things and reworking and rethinking them; so, for the sake of being able to call something "done" and "finished" I have had to train myself to be quite ruthless about Letting Things Be.

But it was really nice, and in doing it I realized that, even though the rest of the Goddess Oracle Deck cards are a good ten years old now, I could still find plenty to explore within that format and that premise and that artistic style; and they're quick to make, too, unlike most of my other work, and the instant gratification aspect of it is a very good thing. So I'm conflicted. You know.

Mostly what I've been doing this past week, though, is working on getting a Sims 1 site together. I have surprised myself by being consistent at it; this last year I've been feeling so rootless and in-between with Things Artistic that I have had to resort to telling myself to just do something for half an hour, after which I can go do something else if I want to. But I remembered something I learned in college about using my time.

Some semesters, because of the schedule, I would end up having these little blocks of time, like an hour and a half, between classes. Time enough to go home and hang out, but not, I thought, time enough to actually get anything done. Which turned out to be not at all true, and once I started using those bits of time I found I got far more done than I ever would have thought, as it spilled out into the rest of my time. So, I'm relearning how to be productive, I guess. Perhaps I can smell spring on its way.

Anyway, here are a couple more examples of the little Sims dresses I've been making: 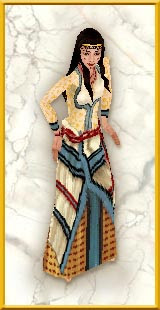 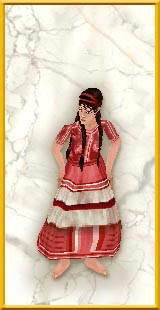 It occurred to me last night that, though I chose to make One Hundred Toys, I am in fact participating quite literally in the One Hundred Dresses Project too, with all the little virtual dresses I've been doing. Interesting.
Posted by Thalia at 7:05 PM

The way you got your newspaper stock reminded me of art school! Scavenging from the whole world - everything starts to look like art supplies!

I like the dresses - so different from anything I see anyone wearing these days.

Oh, I'm so glad that the Creativity Log has been helpful. See, I could have told you how phenomenally creative you are all the time, but seeing it written down seems to have a much bigger and better impact. :-)

The thing with the newspapers is the day I remembered to buy some was the day after the inauguration, and I thought that if I bought one it would be a terrible shame to rip it up, since they'd be valuable souvenirs in the years to come. Not that I bought one, in the end, either.

And yes, Leah, seeing it written down, being confronted with it visually, well, it's a lot harder to deny I guess.