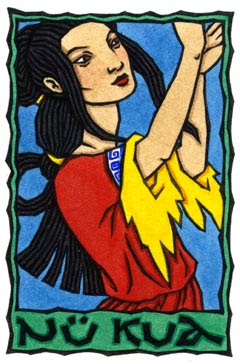 Nü Kua is a Chinese Goddess of Creation and Order; She is said to have created the first human beings from yellow earth and restored the heavens after a mythical battle. She finds order in chaos.

In legend She was one of a line of mythical rulers, succeeding Her brother Fu Hsi; and She was known for Her great wisdom as Empress. But during Her reign the great (and rather violently-inclined) dragon Kung Kung decided to make trouble and challenge the God of Fire, Chu Jung; and though Kung Kung lost, he succeeded in wreaking all kinds of havoc, breaking the pillars of heaven and flooding the earth.

To repair the great damage Nü Kua gathered together five kinds of colored stones which She melted and used to make the heavens whole again; and She used the legs of a tortoise to hold up the four corners of the sky. To stop the flood, She filled the hole through which the waters came with the ashes of reeds.

There is another version of this story, in which a Goddess-Queen known as the "Mother of the Gods" went up against a local chief with Her army. The Queen won the battle, and in his rage at being defeated by a woman the chief decided to end his own life by banging his head against the Heavenly Bamboo, which held up the sky. He actually succeeded in knocking it over, which caused the heavens to tear and let in a great flood; so the Queen, like Nü Kua (if She is not simply an aspect of Her) then repaired the sky with a powder ground from five colored stones.

Nü Kua is about creation and order, and being able to organize and prioritize things, so that creation can then take place. I can see about a million ways this applies to my own situation, and coincidentally enough I have rather uncharacteristically been cleaning and organizing things the past couple of days. But that's me. What is Her message for the World this week?

I create order from chaos. Yes, it is itself creation, not mere cleaning. I create the space in which creation may occur. This is a sacred duty; and nothing will happen without that first.

For the world? This is a time of winter and drawing-in, of long cold nights and time spent indoors; and before one can re-emerge in spring, one must make space for it. Let the old die with the old year; and take this time to sweep it out, so that the new may have space to grow. Take some time with this now; do it slowly, carefully, and thoroughly. It is part of the magic of restoration and hibernation.

Looking it up I find hibernation comes from the Latin and means "the action of passing the winter" or "being in winter quarters." Perhaps She is saying this is a good time to look around at your surroundings and home and take stock of what you have right now; and that it is easier to see what you do have (of possessions, talents, or blessings) if there is a certain amount of order to things, and that the process of organizing makes them apparent.

To read more about Her, go here.
Posted by Thalia at 1:15 AM

I am reflecting a lot on the things we have created this weekend.

This is a week to stay a bit quiet looking at all these new things that have arisen...

It makes a lot of sense to me!

I can't help but think it's also something to do with tying up loose ends before beginning the new. Of course, the fact that my country is going to inaugurate a new president within the week could be contributing to that.

It is the time of expectation, right?

I had that by the beggining of the week... you guys are having it now... I wonder which will be Goddess for the inauguration week...

Wishing you people all the best luck!