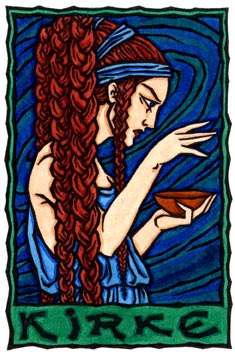 So a week has passed already, and it is time to pick another Goddess for a reading from my Goddess Oracle Deck.

This time Kirke came up.

She's Greek and accounted a sorceress; the famous wanderer Odysseus had a bit of a run-in with Her, in which She transformed his sailor-men into swine, as it was Her habit to change any men who set foot on Her island into beasts. Her knowledge of herbs was legendary, and She was versed in many of the more powerful forms of magic, including necromancy, for She gave Odysseus detailed instructions on how to contact the late seer Tiresias.

So this is a card of transformation; all the legends of Kirke, even the Roman ones (where She is called Circe and is usually standing in for a local sorceress-type Goddess), have Her changing people into animals or birds. So it's transformation of a primal kind, one that goes back to the root of things.

It would seem that this week some kind of powerful magic is swirling about; and change is in the air. Now, that's not very surprising given that it's autumn, a season that brings quite dramatic change; but I'm tempted to interpret this in light of the political situation with the US elections coming up, and the possibility of change it brings.

Kirke's magic, though, does tend towards, if not the chaotic, then the amoral at least; but power is power, and it is up to the holder of it to choose what to make with it.

So I asked what She had to tell the world now, and this is what She said:

Now is the time. It would seem to be a good week for magic, then, or casting spells, especially of a transformative kind; either for yourself, or for the greater community. It is said the job of a Witch is to turn the Wheel; this week especially there is a good deal of movement already underway, which can be both fueled and ridden. Make the most of it.

What do you think of Kirke's appearance this week?

For more information about Kirke, go here; for Her Tale, here. For the article on Dea Marica, a Roman Goddess associated with Kirke, here.
Posted by Thalia at 11:52 PM

Congratulations on your new venture, Thalia.
I find Kirke very apropos, as the winds of change were blowing Friday night and into Saturday here in my little corner of the world.

Thank you for the well wishes, anonymous.

Something is moving all right.

I am no longer anonymous. Just very new to this venue of blogging and posting. I have been enjoying your work for several years and appreciate your vision and wisdom shared. Thank you.

Oh well thank you Kailyn, and nice to meet you!