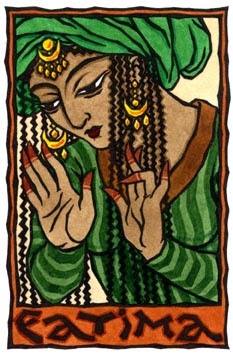 This week's Goddess card is Fatima, daughter of the Prophet Mohammed in Islamic legend. She is, properly, a historic figure around Whom a certain amount of saintly or divine qualities have accrued; and She is much revered in Islam, especially in Shi'ite tradition.

She was the only one of Mohammed's children to have surviving offspring; and the Fatimid Dynasty of the 10th-12th centuries claimed descent from Her (there are now, by some accounts, millions of people who trace their lineage back to Her). She is famous for passionately fighting for both Her husband's claim to the caliphate, and for Her own right to inherit Her father's property after his death. She died young, after suffering a miscarriage, a few months after Her father.

She spent Her last days mourning both Her father and Her two sons, who had been killed by a rival faction. She is known for Her tears and Her compassion, and it is said She will intercede on the behalf of women sinners on the Day of Judgment.

The hamsa, which in Arabic means "five" is a hand-shaped charm common to both Jewish and Islamic culture which is associated with Her, and so sometimes called "the Hand of Fatima." It is said to protect against the evil eye and likely predates both religions.

She has many titles, especially among the Shi'ites; and some of them are more than a little suspicious when viewed through a, hmm, Goddessy lens, shall we say. She is called the Mistress of Waters, and is said to have been able to perform miracles, one of which involved the use of Her "luminous veil" which resulted in the conversion to Islam of an entire clan of Jewish people. One of Her most common titles is al-Zahra, "The Luminous One;" another is Umm Abiha, "Mother of Her Father," both of which point towards Divinity; and reverence of Her may have ties with worship of an earlier Moon Goddess, though it is hard to say.

Now, this week is the week that includes Samhain, the end of one cycle and the beginning of another; and after all the darkness of the past few readings I thought this card offered some real hope. I have depicted Fatima here as a compassionate healer, about to use those famous hands of Hers. And in researching this post I found out that the hamsa (chamsa in Hebrew) amulet has been adopted by some Middle Eastern peace activists as a symbol of common ground between Muslims and Jews.

So with that as theme, I'd like to think this coming week will see calmness and understanding settling among people; or, given that the US elections are very close now and that now is not usually the time for the campaigns to be ratcheting down the rhetoric, perhaps She is calling for us to be voices of peace, healing and understanding, especially towards our Muslim compatriots, who have been directly and indirectly dissed an awful lot recently, what with the pot-shots being taken at Barack Obama of the middle name Hussein.

When I asked Her What do You have to say to the world at this time? She said:

Well, that sounds to me like things are not necessarily going to get any calmer in the near future, unfortunately (though I am not surprised); the best we can do now I guess is try to be a calming influence.

I have a lovely, pewter-and-blue-glass hamsa hanging over my computer to avert the Evil Eye (specifically mine: I can't afford to fry another motherboard). I bought it after coming across a theory that the hamsa derives from the symbol of Tanit, the Phoenician Moon Goddess.

I find it plausible.

Yeah, I ran into that theory while researching this article. I don't know. Mostly the "symbol of Tanit" looks to me like a stylised woman with her arms raised in prayer; the hamsa is pretty specifically a hand, and I don't see something like that evolving from something else.

That's just my take on it though.

It's hard for me to explain why I agree with the theory, other than so many hamsas seem to have two thumbs pointing in opposite directions. I feel like "hand" is the most recent incarnation of the symbol.

It does have two thumbs, true, but I figured that was just a love of symmetry. It makes sense from a design standpoint.

I've seen versions of it that are little more than five squares arranged on the diagonal; I'd guess it's intrinsically linked to the number five. But again, these are guesses on my part.

Some of my (cursory) research tonight implied that there were some very old versions of it out there (by which I mean archaeological finds): I'd be interested to see those.

I'd be interested to see those as well. I was able to find one modern pendant described as an "ancient hamsa," which looked like... well, a hand. But considering that the Web site where I found it is geared towards fashion accessories for the trendy tween, I don't know how seriously I'm willing to take it.

Here in Brazil the Hands of Fatima are very common... actually, people here are interested in everything that may award off the evil, not mattering too much where they come from.

I think Fatima is a very interesting character because many arabic folk stories have women called Fatima and they are always the "hero", the one to solve the problems with wisdom.

I hope her witts be with us during this week!

Yes, a lot of what came through in the legends of Fatima I read was Her wit, intelligence, and eloquence. And fearlessness, as She argued passionately for Her inheritance, or for Her husband's cause; and a lot of it, too, was about Her going up against the (male) hierarchy that was in place. Especially the inheritance tale: the argument against Her inheriting Her father's property after he died was that someone else claimed to have heard him say that Prophets will leave no inheritance; all is for charity. I got the impression it was really meant as metaphor, not as a literal tool to disenfranchise his daughter, and She argued the same.

So it's interesting on a lot of levels.

Wow... that is very interesting...

It seemed to me something like the relationship between Aradia and Diana, and how Aradia became the first witch, la prima strega.

Of course there is a basic difference, as Aradia is the daughter of a Goddess and Fatima isn't, however, the power contained in the heritage seems very appealing and strong in these two "earthy" characters.

Maybe I am too involved with heritage subjects this week!