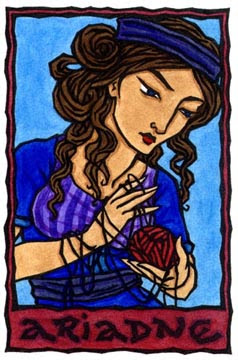 So I shuffled the cards, as thoroughly and as obsessively as usual, while asking, What do You Goddesses have to say to the world this week? And Ariadne came up.

After I stopped laughing, I very nearly made myself pick another card. I had quite specifically asked, What do You have to say to the world? But picking Ariadne was just so obvious and perfect a reading for me. And I mean obvious as in dope-slap in the back of the head obvious. The short version being that in my dreams and visions lately the theme of the Labyrinth has been coming up over and over; and I know I've just set one foot over the threshold of the place and am beginning some kind of major journey deep within. I am aware of this, quite consciously.

So when I pulled Ariadne, Who is after all the Mistress of the Labyrinth in Greek myth, I had to stop and ask the cards, Really? Are you sure? For the world, not just for me, right?

But they said yes.

I suppose that one way to look at it is that I, like everyone else, am influenced by the seasons and the themes of the world; and it's true, the season of the beginning of the journey into the dark is upon us (well, if you're in the north, anyway). Because that's what I had been thinking, that Samhain was the point mythologically when one first enters the Labyrinth; while Yule was that dark, still centerpoint, and Imbolc in early February when we step back out into the light.

I should probably start with some information about Ariadne Herself, eh? She's of Minoan Cretan origins, though the legends are Greek. In them, She is a mortal princess, the daughter of King Minos of Crete, who gives aid to the hero Theseus, (though he doesn't deserve it, really) by giving him a magical ball of thread that helps him to navigate his way through the Labyrinth. He and a group of Athenian maidens and youths (i.e., children) have been condemned to be eaten alive by the Minotaur, who lives somewhere inside it. Theseus, being the hero, finds the Minotaur and kills him; and Ariadne escapes with him to Sea.

Where he abandons Her first chance he gets, though She had helped him out of love; in some stories then, the God Dionysos comes upon Her and marries Her, and She becomes immortal.

Now, really, these stories point to an older layer, one of underlying divinity for Ariadne; and She may in fact be a form of a Minoan Great Goddess. She is old, certainly.

So getting this card at this time may simply be a statement of the time of the year, of endings and beginnings and the journey into the dark. But what I'm also getting, quite strongly, is the idea of loving someone who does not deserve it, and coming to the realization that one deserves better. On a personal scale I suspect we are all too familiar with that dynamic; but this is a reading for the world. Perhaps, just perhaps, we humans are on the verge of waking up and realizing we can do better by each other, or that greed and intolerance do not deserve our love; though my cynical side of course wonders if it's not the Earth Herself making the realization. If so, oh ho are we in trouble. Either way, I suspect it will be a long journey, one requiring a lot of soul-searching and attention to details, and a bit of Divine Guidance.

Now is a time to get to the root of things; this time is unlike any other. It is an opportunity; use it. It will take care, patience, and will be hard work, but understanding must be thorough. Ask for guidance; you will receive it. And when others ask you for it, give it. The bee dances before the hive; She instructs others. Tell others, help others, and be as specific as you can.

Sounds like preparation for a journey into the Labyrinth to me. What do you think?

To read more about Her go here; to read Her tale, here.

Edited to add: here, this will help. It's a link to the World Wide Labyrinth Locater. Type in where you are, and it will come up with a list of labyrinths in your locale that you can visit and walk if you're so inclined.
Posted by Thalia at 8:32 PM

I certainly find it appropriate for me this week. Definitely entering the Labyrinth, in for a season of introspection.

I recently went thru the fire labyrinth- the energy was electric. I also made one in the garden- when I should have been raking the leaves- It just looked so fanatastic- I left it there for days. I have a message for you on my blogspot when you have time to pop in. Brightest Blessings.

An amazing author to read about the Greek Gods and their relation to humans and their Nature is Roberto Calasso. His book "The Marriage of Cadmus and Harmony" has a chapter only dedicated to Ariadne and Dionysos... ABSOLUTELLY WORTH IT!

Beweaver: you are most welcome, and blessings to you.

Shamrockwitch: what do you mean by "fire labyrinth?" And how did you make the one in your garden? I'm feeling the deep need to walk one myself. I wonder if I could mow one in the lawn, if I used that push/acoustic mower and was very careful?

Pietra, have you ever read Kerenyi's Dionysos? There's a lot of stuff about Ariadne in there.

The fire labyrinth was at The Mercian Gathering in September this year- alongside around 700 fellow pagans. It was a wonderful experience- I have posted a picture on my blog spot- post title- The Mercian Gathering.
The Labyrinth in the garden was made from leaves- it was actually a very large Reiki symbol- walking thru it was so calming. Brightest Blessings.

Thalia, not yet, because it is cued with others I am reading... And all in all I quite like Kereny's approach to the Gods.

Another interesting book is Nono's Dyonisiacas. (There is a lot on Persephone too).

OH MY GOD shamrockwitch that fire labyrinth photo is amazing! I can feel the energy from here.

Pietra, I'll look up those books. Thanks!

I just wanted to say that I love your art, especially the Greek Deities (but I may be a little biased [wink]). Very inspiring.