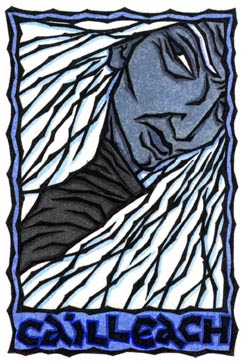 This week after shuffling and asking of the Goddesses, What do You have to say to the world at this time? the Cailleach came up.

She is Celtic, and is known as the Blue-Faced Hag; Her name means "the Veiled One." She is a Goddess of winter and the cold earth, and there are many variations to Her in the British Isles, usually with strong ties to the land and to the season of winter. As Samhain is the beginning of the dark half of the year in Celtic tradition, picking Her at this time seemed appropriate, if a little early.

She is commonly called a "hag", though the word cailleach is used in both modern Irish and Scots Gaelic to mean "old woman;" but the word itself has connotations of widow and nun as well. So She is someone drawn into Herself, celibate.

It is sometimes said that She starts the winter as an old woman and slowly becomes younger until by springtime She is a beautiful maiden; or that She imprisons a young woman in a mountainside over the winter, and releases her in the spring. Unsurprisingly as a Celtic Goddess of Winter She is connected with ancestors and the dead, and the descendants of the Cailleach Bheirre were peoples and races.

But She is also associated with the preparations for winter; and the last sheaf of grain harvested was traditionally called the cailleach, the old woman of the fields. This sheaf was saved over the winter, and in the spring it was fed to the horses or cattle, or shaken over the fields in hope for an abundant harvest. In the Isle of Lewis the cailleach was dressed as a woman whose apron pockets were filled with cheese and bread and a sickle.

The economic situation this past week has been fairly dark; and it is hard not to see this card as predicting a rather bleak outcome. And, sure enough, when I asked Her what She had to say She said:

Old, old bones. Old, old cold. Ice and cold and fear; the cold wind howls from the north. A time of leanness and starvation. The reindeer digs beneath the snow to find the lichen; the fox starves; no meat on anyone's bones. The veil is thin, thinner, thinnest. Winter comes. Save your seeds.

And I am reminded of this phrase: the conservation of energy. There is a time of leanness coming, one that parallels the winter. Draw in your harvest, and do what it takes to preserve it and make it last. Hard times are coming.

Though as this is a card for the next week, perhaps it simply speaks of how the future will look in that week. This card may represent our fears of hard times more than actual coming hard times. It is hard to tell, as I, too, am caught in that fear. I think calmness and patience, and preparation, just in case, are advised.

For more information on the Cailleach, go here.
Posted by Thalia at 8:45 PM

Wow...
My friend and I were just talking about this Goddess last week and how it is strong the idea of the woman of winter and how many things may wither in her hands...