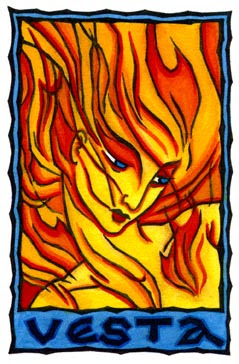 It's Vesta's second time here; Her first appearance was back on June 13th, right smack in the middle of Her holiday the Vestalia. Though the traditional day of that holiday was the 9th, Her temple was open to the public (meaning women of the public, as it was always closed to men) from the 7th to the 15th of June.

Vesta is the Roman Goddess of fire, the hearth, and the center. Her little round temple was (is) located in the heart of the Roman Forum, the heart of Rome (both City and Empire) itself. It was believed to be very ancient, having been founded either by Numa (the second King of Rome) or even Romulus (the very first King after whom the city was named). Its round shape was thought to echo the primitive round thatched huts of the early shepherd-settlers of Rome. It was not properly an inaugurated templum, though, but an aedes, a 'house' or 'dwelling place', usually referring to that of a Deity; a templum, was, technically, a space officially marked out as one where the augures could read the signs. A templum was traditionally square or rectangular, probably because the cardinal directions played an important part in the readings; perhaps this is one of the reasons Vesta's 'temple' wasn't. Or, perhaps, it was just that old, and that central to the state religion, and so was something of an ancient exception to the rules.

In that little round house burnt a perpetual fire, one tended by Her famous college of priestesses, the Vestal Virgins. That fire, that hearth, was itself the official image of the prototypical altar, the hearth fire of the home; in early times, the family would gather around the hearth and offer to Vesta each day.

Vesta's temple, as a sort of emblem or symbol of the home, the hearth, the center, had a chamber at the center of it (though given the ruined state of the temple currently, the layout is not clear) called the penus, the name given to the pantry or larder of the house, and another expression of the idea of the center. (What is more central to a home than where the food, the nourishment, the prosperity, is kept?) In this aspect She was worshiped with the Di Penates, the household Gods of the larder, Who, with the Lares (household Deities) protected and watched over the house. On the national level, the Penates installed in Vesta's temple were the Penates Publici, Who also at one time had Their own temple a little further up the road from Vesta's temple on the Velia.

The penus of Vesta's temple contained sacred things, things that were central to the ritual safety and prosperity of Rome. No one knows quite what they were nowadays, but possibly those sacred things included statues of the Penates Publici and the Palladium.

The Palladium was a statue of Pallas Athena (Whom the Romans equated with their Minerva) said to have been brought to Rome out of the ruin of Troy by Aeneas. Before that it was said to have miraculously fallen out of the sky to Dardanos (or Ilos), the legendary founder of Troy; its presence was thought to keep the city safe. (Not unlike the the ancient olive-wood statue of Athena Polias kept in the Erechtheion, which was also said to have fallen from heaven).

Now, these are the Romans we're talking about, so it's safe to say that much of that is pure political propaganda, to establish a link between the old great Greeks and the hoped-to-be-great Romans. (Which to be fair, they were.)

Now that's all a bit of a tangent, I suppose; but you never can tell. For some reason this week the Penates and the secret hidden chamber, in some way a holy of holies was really resonating with me. It wasn't until I started doing the research, however, that I found out that the festival dedicated to the Penates is October 14th.

So. Vesta both is, and guards, the center of things, the hearth, the heart, the fire, the source, the holiness in the very middle of place and self. What is in there, for you? How will you enter into that place, that innermost part; what defenses must be penetrated (yes, it is a related word) to get into that place? How do you act (or not act) as the guardian of your own holy places? Do you know how to get there? It may be easier than you think. After all, all roads lead to Rome, they say.

What does Vesta say to all that?

Dear, start with warmth. If you can feel that glow, that warmth, that aliveness, that fire within you you are on the right path. It is unmistakeable; you will know. What makes your heart beat? What makes your veins run with fire? Not just the light, but the heat, this time. Not with your eyes will you see it; but with your skin, your body, will you feel it. Track that warmth, be drawn to it like the fire at the hearth when you come in from the cold and the rain.

You will come home.

Dictionary of Roman Religion, by Lesley Adkins and Roy A. Adkins

The Acropolis in the Age of Pericles, by Jeffrey M. Hurwitt

A New Topographical Dictionary of Ancient Rome, by L. Richardson, Jr.
Posted by Thalia at 11:16 PM

Simply beautiful! I love Hestia/Vesta, so I am always happy to see anything written about Her. Hail Vesta!

Not just the light, but the heat, this time. Not with your eyes will you see it

Damn boy's taken up residence in my brain, hasn't he. Oh well, could be worse I guess.

We're having absolutely gorgeous Autumn weather right now -- perhaps it's Hestia/Vesta who is blessing us with this unexpected warmth and heat!

Thank you for that :)
It's a very poignant reading for me. Vesta has always been at the heart of my worship (well where else could She be? ;)). My man has gone off to Gaza to bring aid. I've been lighting a candle for him every night, to guide him safely home.