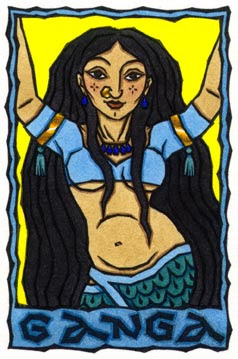 And now we're back to Water, from Fire; this week's Goddess is Ganga, the Hindu Goddess of the Ganges River. She last came up on April 19th. The Hindu Goddesses seem to have been coming up a lot lately; I don't know if that means anything, or is just random. For whatever 'random' means, anyway.

Though She is a Goddess, and is sometimes depicted in human form with rivulets of water to either side, She is more often referred to as just the River; in Her case, the River is Her primary image. The Ganges is believed to descend from heaven to this earth and to contain great powers of purification.

In one tale the Ganges River was persuaded to descend to earth, so that humans and the earthly world might have a share in the Divine; but She feared that Her descent would be so powerful it would destroy the earth. So Shiva agreed to put Himself between the River and the world, thus breaking Her fall and keeping the earth safe. The Ganges is said to wander about in Shiva's hair, which is matted and tangled as befits an ascetic God, before falling to earth.

In another tale Vishnu, in walking the cosmos, accidentally stepped through the surface, breaking a hole in the heavens. Through this hole the Ganges descends; this time Her fall is broken because She lands on Mount Meru, the center, axis mundi, or omphalos (to use the Greek term) of the world.

So the Ganges, and Ganga, then, are representative of the Divine River, what one might reasonably call the Divine Source, out of which all things flow. So this week, I think we retain the emphasis on the Center, and that which is located there; but it has shifted a little, to include the idea of that which flows out of that Center.

The thing about the earthly Ganges, though, is that, for all its divine powers of purification, in modern times it is one of the most polluted rivers on earth. Yet despite this pollution it is believed to still retain those powers of purification. Now, I personally feel rather uncomfortable with the idea of purity as a Pagan (or Neo-Pagan, to distinguish my religion from the 'pagan' religion of Hinduism, as Christianity would call it), as I have a great respect for the powers of breaking down, dying, and rotting (especially in a New England October); there is, perhaps, a metaphor in there: how has that which flows out of the Source been changed or polluted?

Or maybe that is not the best word. Perhaps we are talking more about a loss of clarity of vision. True, rivers change. The river that flows by is always different while always the same. Still, I am wondering about how, say, a vocation, a calling, can change into something that is just a job. How has that river changed? What muddies it, pollutes it?

How might you clean it up? What needs to be removed, screened out? How can you regain some of that clarity? Can you? Is it even possible? Is the river different?

I have a feeling She can shed some light, some clarity on all this. What does She say?

You know it does not work that way.

You are almost asking about a lost paradise; a place of shining light and purity from which you have fallen. You know that is not how it works.

If this earth, this River, is dirty or polluted it is what you have brought to it. If you have filled paradise with junk, it is up to you to clean it. That is not an accusation, really; I am simply saying that those with the power to dirty have an equal power to clean. Underneath it it is still paradise. It is still the River that flows.

Nothing is uncleanable, unfixable, irreparable. And you have allies, of course; Nature will take care of Herself, if given the space. She is in fact very good at that.

Not, of course, that you can get back to that exact origin, that original state. You know, I know, that the river is always different, always flowing. And yet at the same time it is always original, always springing up as something new. You do not have to seek origins in some mythical past; it is all around you right now. It is a trick to recognize it, though. Listen to your dreams. It is all old, and all new.

I think She is talking about the Unconscious, about archetypes, about the Otherworld, the imaginal realm if you will, which are eternal and spring up spontaneously, always themselves, always old and familiar, and always new and fresh.

What do you think? What flows from your Source?
Posted by Thalia at 6:47 PM

Labels: Ganga, Goddess of the Week