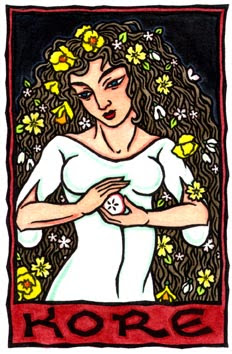 Kore is the cult name of Persephone, the Queen of the Underworld in Greek myth, in Her aspect as the Goddess of springtime and daughter of Demeter, the Goddess of the Earth and agriculture. She last came up in the early spring, which I thought at the time a fairly literal sign of the changing seasons; this time, as it's just after Midsummer's, I'm more inclined to interpret it a little more abstractly.

Kore, Whose name simply means 'Maiden,' was just a girl when She was abducted and raped by Haides, the King of the Underworld. Demeter, in Her grief, rage, and worry for Her daughter, dropped all Her usual duties to find Kore, which meant that while She searched, the Earth and its crops, and the people dependent on them, suffered. As did the Gods, in time, when humans could no longer manage to make sacrifices to Them (what with the starving and all). This, incidentally, was the reason Zeus eventually relented and ordered Haides to return Kore—not so much that the humans of the Earth were suffering greatly, but because He wasn't getting his special snowflake honors. Dick.

When Kore was finally returned it would not be wholly, for She had eaten several pomegranate seeds while in the Underworld, and Divine Law decreed that whoever had eaten there was compelled to remain. But Demeter would not hear of it, and threatened the Earth with permanent barrenness, so a compromise was reached: Kore would spent part of every year in the Underworld, and the rest on the Earth.

This was given as the explanation for why the different seasons exist—for while Kore is in the Underworld, Demeter, still outraged by Her daughter's abduction (as well as, one suspects, the subsequent 'compromise') withholds Her gifts and it is winter; but When Kore is released back to the upper world, Demeter welcomes Her with the luxuriant growth of spring.

Of course, Persephone was most likely the Queen of the Underworld first, not second; but myths can be like that and get things inside-out. Her tale of abduction and release of course also formed the thealogical basis for the Eleusinian Mysteries, which promised its initiates a life after death, based on (probably) the idea that Persephone, Goddess of the Dead, goes on to give birth in the Underworld. There is Life even within Death.

At the final point in the Mysteries, initiates were shown a cut ear of wheat as epiphany. The symbolism of the cut grain is very complex, of course; part of it in this story is that it represents the point in the cycle that is both beginning and end, where the grain is ripe, cut, harvested, and can now serve as food; but at the same time it is a seed, the beginning of the next generation and the key to continuity though it is now dead and cut. Which is why Mother and Daughter in this tale are so close, and depicted in art both as adults, the Mother and Her grown Daughter; They are in many ways the same figure, just at different points in the eternal cycle.

There are so many layers to this, so many spiraling cycles, of course; another one is that even while Persephone is underground, buried, She represents the Seed biding its time, that little thing, that germ, which contains within it the entire pattern of the full living thing, and which though it may appear to be inert or dead, is quite definitely alive.

Sometimes I think that all religion boils down to that one little idea, the Seed.

This card this week means a corner has been turned. Though it is (officially) modern summer up here in the north, the theme is yet that of springtime, of emerging from a dark place into the light to a place of growth and thriving. Especially, I think, as far as health and the body are concerned, our own little personal pieces of Earth. Things are improving, and healing, and getting better all the time. If this does not feel true for you, nevertheless know that it is, and that after a space you will almost certainly be able to look back on this time and trace back to the one little thing that changed it all, though it may seem insignificant now. Trust, I think, is a large part of this.

As ever, I ask, What does the Goddess have to say?

Put your feet on the earth, get your feet good and grounded; you must be grounded first for growth to occur. Preferably at the proper planting depth for you. Work on this, this grounding. Connect. Feel the Earth, your home, my home, our home. You need a strong foundation to simply stand up straight, which you must do before you can expect to build upon it. Feel it; it is yours, your birthright. You belong here.

Once you can do that, then you can unfurl into the light, the rain, and the air. So many get the order incorrectly, then wonder why things collapse around them. You must start with the basics; they form the base, after all. Air, Light, Water, Food: seek these and the balance of them now.

Talk of Persephone always makes me think of that quotation from Camus that "In the depth of winter, I finally learned that within me lay an invincible summer." She is Hope and Trust and Faith.