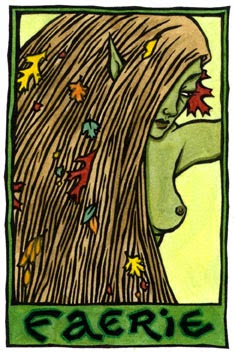 Well now that makes sense. The faeries are legendarily quite active around Midsummer, especially on the Eve. The veil between the worlds is said to be quite thin now, as well. I've always thought that it's because in the northern lands (and even here in New England, which isn't all that far north really) at Midsummer the sky never quite gets entirely dark, and keeps a bit of that luminous twilight glow to it even in the wee hours. And if there's one thing the faeries love it's the twilight and the in-between places.

I'm not sure there's much more to add to that. Get out this week into nature, and find that twilight liminal realm for yourself. Spend some time with the magical, the wild, the overgrown and the in-between, whether in the outer world in its green tangle, or the inner world of dreams and visions. Seek the memories of magical times, or the luminous dreams you once had; it will be restorative to the soul.

What do They, for They are always plural, say?

Leave some garden for the groundhogs.

Well I suppose we can't expect 'serious' of the faeries, can we? Still, that's in line with leaving the last apple on the tree for the apple-tree man, isn't it?
Posted by Thalia at 5:17 PM

Labels: Faerie, Goddess of the Week

Always with the groundhogs, LOL!

the Lady of Dragonwood said...

So are the Fae speaking of groundhogs the wee beasties, or ground "hogs" who would snatch up the land? When you "leave the ground", do you physically fly away or willingly abandon the disputed land? I think there is more here than meets the eye, or the initial impression.

Well I seem to spend most of my summer shaking my fist at the 'wee beasties' who eat my garden. Bastards have a hole right up against the house, right in the middle of the gardens. I found a baby one huddled under a peony last year. I poked him with a stick and cussed him out. (He sorta rolled his eyes at me. Kids.)

I've actually seen one looking in the kitchen window, as if wondering what might be in the fridge.

I've also got deer, and this year oh joy, rabbits. They all seem to eat something different. So, dammit, can't they leave some garden for me?