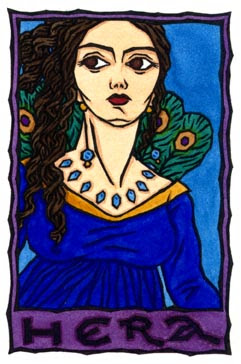 The Greek Goddess Hera comes up here for the first time. In myth Hera is the sister and wife of Zeus, the great Olympian king of the Gods, and so Queen Herself. But Zeus has a wandering eye, and Hera takes the role of the scorned, jealous wife Who savagely punishes Her husband's paramours; She has the reputation of a shrewish, jealous woman. A passive-aggressive conniving bitch driven to behind-the-scenes power plays, actually.

Well, that's the classical version of it anyway. But I think we know better by now, don't we?

The truth is that Hera pre-dates Zeus. She was the principal Deity of either sex of the area around Argos, Her Archaic temple at Olympia is earlier than the one Zeus had there, and Zeus is called posis Hêrês, or 'spouse of Hera' in Homer. The likely explanation for the structure of the later myths is that when Zeus came along, Hera, as the main Deity of the region, was joined to Him as His wife, an obvious Queen to His King. The same process may account for many of Zeus's 'lovers' (in quotes since some of Them were clearly raped): the local Goddess was joined to the new King, as expression of Her status, or by way of absorbing the indigenous religion. That the other local Goddesses kept some of Their original importance is played out in myth as the conflict between Hera as the 'official' wife and the rest as mistresses. Though Hera and Zeus are associated from fairly early times, Zeus's earliest wife may well have been the prophetic Titaness Dione.

We don't really know what Her name means, though an early form, Era is mentioned on Mycenaean Linear B tablets. It may be connected to springtime, or to a word for 'Protectress'; She is very much associated with heroes, which word is related to Her name.

She was probably originally a fertility Goddess, as much as that term is a vague one. She is associated from earliest times with cows (one of Her epithets is Boôpis, 'Cow-eyed') the seasons, especially springtime and its flowers, and to trees: She had several xoana, rough wooden statues, planks, or pillars, either aniconic or barely iconic, generally considered (by the Greeks of the time) as indicative of ancient worship.

Her story is one of uncomfortable adaptation into a new system, with Her fighting it the whole way. I am not sure what to make of it, as far as interpretation for card for the week goes; and I am inclined, as ever, to make more of origins than later interpretation. Especially since Her story is not a happy one, and She becomes locked into a losing battle through circumstance and the brutality of the culture and Her husband, Who was plainly abusive at times. So I'm not sure. Survival, perhaps, and doing what it takes to live in a gamed system may be the theme this week. But remember, if you can, that the system is unjust, even if you have to play along to survive. And that if the rules are immoral, there is no moral reason to follow them.

On the other hand, there is great value in uncovering that which is lost, or buried. Dig down to those origins if you can; what you find promises to be surprising, and healing. Find those roots, whether of the problem you are trying to work through or out, or of your own innocence or authentic self. Remember who you were, and who you are, and find the thread that connects the two.

I am wronged, very wronged. We, I, are all wronged, We this Earth, We the Goddess, I the Goddess, I all of Woman; We are wronged. And though it is not the responsibility of the wronged to make it right, that is the only way it will happen. Those wronging us are not about to stop of their own accord. They have made that quite clear.

So we must take what is ours. Earth will right Herself, at whatever cost; though She uses a broad brush, and will take the innocent with the guilty. It cannot be helped. Survival, after all, is first. And She may not be judged.

The Transformation of Hera: A Study of Ritual, Hero, and the Goddess in the Iliad, by Joan O'Brien, through Google Books. Oddly enough I can't find a copy for sale through the usual places. Which is really weird as it's neither too old nor too new, being published in 1993. Really, not one used copy available anywhere?

Labels: Goddess of the Week, Hera

Interesting! I actually had the urge to sketch a peacock earlier today so seeing Hera in this post was... odd coincidence to say the least. :)

I always think of Hera (along with the Virgin Mary) as "The Goddess Demoted." Once the Goddess of All, She is now demoted to humiliating subservience to an upstart male God. But She soldiers on, as best She can, in these new reduced circumstances. And in Hera's case, her impotent bitterness twists into rage and jealousy.

Sometimes, survival is victory. Because without surviving, any "moral" or "honorific" victory means nothing.

Thank you for this lovely icon of Hera, to whom I am devoted (along with Athena).

That's beautiful! And one of my favorite Goddesses.

I got to see some of your work in person this past weekend and I'm officially a fan.