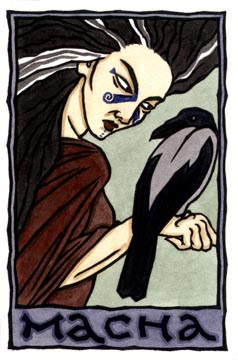 For the first time in one of these readings I pulled Macha. She is an Irish Goddess, usually considered one aspect of the great triple Goddess of war and sex the Mórrígan. Macha, like Rhiannon in the medieval Welsh tales, is understood to be a woman of the Otherworld, but like Rhiannon She likely has roots in an ancient Goddess, perhaps even the same one--the continental Celtic Goddess of Horses, Epona.

The Mórrígan is a name meaning 'great queen', which is the exact Irish parallel of Rhiannon's name (which is more apparent when you consider the probable Romano-British form of the name, Rigantona); on the continent in Roman times, Epona was frequently given the Latin epithet Regina, 'queen'. Likely, then, we are talking about several Goddesses Who grew out of the old continental Celtic Epona.

The three aspects of the Mórrígan are not entirely clear, and there is disagreement as to how to arrange the strands of Her; usually, though, Her three aspects are named as Badb, Nemain, and Macha (others leave out Nemain, substituting a singular Goddess called the Mórrígan, and then call the whole trio the Mórrígna, which as far as I can tell is just the plural form of the name, meaning 'great queens').

The Mórrígan may additionally be an aspect of the Irish Earth Goddess Ana, which then links Her with Danu, making Her roots very old indeed, as Danu (which is, incidentally a hypothetical name) is linked with the Danube river in central Europe.

The Mórrígan as Goddess of War is a prophetess and shapeshifter Who often takes the form of a crow; Her aspect Badb, Whose name means 'hooded crow', haunts battlefields and takes joy in slaughter (She is also called Badb Catha, 'crow of battle'). Nemain's name means 'battle fury.'

Now to Macha. The meaning of Her name is a little hazier; it may mean 'earth' or 'field', and She may also be an aspect of an Earth or Sovereignty Goddess, not unlikely given that there are at least a couple places named for Her, Emain Macha (site of a late bronze age hill-fort, and the mythical capital of Ulster in the legends) and the city and district of Armagh (older Ard Macha, 'height of Macha').

In a peculiarly Celtic fractallated way (these tangled strands and slightly shifting variations on a theme remind me very much of the twists of Celtic knotwork, or the improvisations within the set rhythm of a reel), Macha, Herself an aspect of a triple Goddess, can be split into a further trio, as there are three distinct Machas in Irish myth. They are all, however, said to be the daughter of Ernmas, Who is also the mother of the triple Sovereignty Goddesses Banba, Fódla, and Ériu; the latter Goddess is the one after Whom Ireland is named.

At any rate. The first Macha is a prophetess, considered the wife of Nemed; not much is known of Her. The second is Macha Mong Ruadh, Red-Haired Macha; She is a queen of Ulster Who defeats Her rivals to the throne in battle. The heads of those slain in battle are called after this Macha mesrad Macha, the mast or acorn crop of Macha.

The third Macha is the most well-known. Like Rhiannon, She appears to be an Otherworldly woman Who seeks out a mortal man for a husband; unfortunately, also like in Rhiannon's tale, said husband proves to be, well, an idiot. He was a farmer named Crunniuc, and after they have been living together for a time he tells Her he is going to a great festival; but She warns him not to make mention of Her to anyone there.

As you might guess, once there Crunniac immediately brags about his wife, telling the king that his wife can outrun any of the king's horses. This, understandably, annoys the king, who demands that Macha then run against his horses; though She protests that She is nine months pregnant and about to give birth, the king threatens to execute Her husband if She does not run. So She does, and easily beats the horses; but just over the finish line She goes into labor, giving birth to twins.

And as She dies She sets a curse on the men of Ulster. For eighty-one generations, the men of Ulster are destined to suffer the pain and debilitation of childbirth. This pain is to last five days and four nights, and is only to apply when they are in great need, i.e., at the most spectacularly worst times possible.

The women of Ulster are, of course, exempt.

I have shown Macha here as a war Goddess with a hooded crow, in clothing the color of dried blood, walking the battlefield in the morning mists.

This week in my area we had a spell of hot summery weather followed by a much cooler patch; and it has put me in mind of autumn. Chilly nights and clear days, the crunch of acorns beneath your feet and the impending descent into the dark. It is coming.

This does not negate the harvest-theme of the past couple weeks; rather it throws into sharper focus the fact that there is more and more dark mingling with the light. There is death here, or there is dying here; it is dark but it is not something unexpected, either, unless autumn takes you by surprise every year. It is also aftermath, pumpkins in a field after the frost, pumpkins which by some modern trick of tradition get substituted for faces, jack-o-lanterns and scarecrow's heads.

It must be the cold weather here putting this in my mind; or maybe it was the magazine cover I saw today of, of all people, Martha Stewart hamming it up for the Hallowe'en issue of her magazine as a witch posing with an eldritch-looking black horse.

Last year I wasn't the only one to notice the veil thinning earlier than usual; whether I'm seeing the same signs this year or merely fearing it I don't know. And I have to ask, if this is a trend, is it because we humans, in our relentless poisoning of the planet, have worn it threadbare?

I am afraid to ask, a little, but She is here, and She will be heard:

Do not fear. I am on the side of every woman. I should have thought you would know that by the stories. I am sister, mother, the Earth Herself. I know a victim when I see one, and I do not fault the women. I do not curse women.

Labels: Goddess of the Week, Macha

Thalia, sometimes my initial reaction to your posts is just to cry. This is one of those posts. I can only suspect that it means there is something inside me that is dying to be heard, but I either won't listen out of fear, or have become deaf through practice. I can almost see the answer, but am deathly afraid of the responsibilities "seeing" will bring.

You have solved a mystery for me though, by naming Macha Mong Ruadh. She... appeared to me last year, as a message for someone else, but I didn't know who She was. The closest I got was Ana or Ernmas, but knew that wasn't quite right. Macha's warrior aspect is definitely it! I am quite excited about this :)