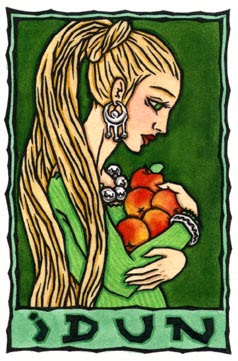 This week's pick is again Idun, Who showed up just about two months ago here. She is the Norse Goddess of Youth and Springtime, Who grows, keeps, and metes out the apples that keep the Gods young.

Last time for whatever reason She was coming across to me in a sort of Winter aspect, oddly enough given that it was the middle of summer where I am; perhaps it was something to do with the legends that tell of a possible descent to Niflheim or the Underworld, much like how Persephone's descent in the Greek legend brought on the winter season. Now, however, I am inclined to interpret this card as one of obvious harvest, and a continuation of that theme from last week's card, that of the Roman Grain-Goddess Ceres. Though it isn't apple-picking season here, and won't be for another couple of months, there are other harvests going on right now, such as that of the vegetable garden.

This card, then, is about the ongoing work of harvest, and being in the midst of a time of abundance. This can be quite literally of the garden variety (let me tell you about tomatoes), or the fulfillment of another creative project. The important thing to remember is that it is really still only just getting under way. It will still require effort and maintenance on your part, but if you tend and harvest your projects carefully the results should last you quite some time. Perhaps the metaphor here is that of canning summer's bounty to put up for the coming winter and lean times.

What does Idun say to us this week?

Yes, harvest and hoard. Be careful, let nothing be wasted. If there is a spot on the tomato cut it out, then chop it to can with the rest. Be accepting, and do not unreasonably expect perfection, for much good, much abundance, much nourishment, will be missed. I'm not saying the times ahead are dire, or at least that they are not any more dire than any winter is, just not to discard things of value if they are not quite exactly perfect. Cast a wide net at this time. There will be need of all of this harvest later.

Also, never forget to save your seeds.

What do you think? What is your harvest right now?
Posted by Thalia at 10:55 PM

I think one of the reasons She was coming across last time as wintry is that though She is the Goddess of springtime and youth, there is an element of hoarding, of saving and preserving, about Her. She very carefully keeps those apples, and She is aware at all times that winter is coming. Not surprising I guess for a Goddess of such a northern land, which has such harsh winters and must have a fairly short growing season. There is a carefulness and an anticipation about Her. She knows that lean times always come, and She is determined to be prepared.