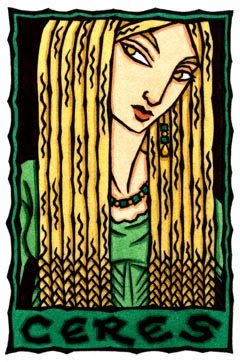 This is the first time I've picked Ceres for the Goddess of the Week. Not too surprising given the time of year up here, that being late summer with its long golden days and the harvest fast approaching.

Ceres is the Roman Earth Goddess, and is especial patroness of the cereal crops like wheat, barley, and spelt. Her name comes from a root meaning 'to grow' or 'to nourish'; and cereal means 'that of Ceres.' She is a very old Goddess, and though She was early on assimilated to the Greek Great Mother Demeter, Her roots go back at least as far as the beginning days of Rome.

She is a Goddess of women, nourishment and growth; at Her rites in August, which were only open to women, She was given the first fruits of the harvest.

Though it is not yet quite the traditional harvest time, I can tell you that my garden at least is currently overflowing with tomatoes and green beans. (It would be overflowing with other stuff, had not the rabbits/groundhogs/deer nibbled everything else to the ground. One of these days, dammit, I will grow some zucchini.)

So, then, I'd say Ceres this week is about early harvest, a sort of preliminary or unlooked-for bit of abundance and bounty; something, maybe, that you were not expecting was going to be done or ready quite so soon. Something, even, that you may not recognize as a harvest. Look around. See what in your life is already bearing fruit.

Also, could be that you are looking at the beginning signs of a major harvest or the first stirrings that a project is finally coming to completion. Keep tending to it, for it is not over yet; it also may require a bit of work to keep up as the harvest continues to roll in.

I bring beginnings, too, don't forget; I am the Goddess of the sprouting seed. Yes, of course being who I am my timing, my schedule is intrinsically bound to the seasons; still, beginnings, creation, growth, new or continued is mine. So while you plan for the harvest, and it is wise to do so, look also to the seeds that are coming up still. There are all kinds of harvests. One might even plant lettuce in December, further north than you might have thought possible. So do not forget to look to a circumstance of what you might think unusual timing. It is still mine.

But mostly, yes, harvest. Gather the wealth in to you and yours; tend the plants and the fields, whatever form they make take; and remember to give thanks. Gratitude always makes the crops grow higher and more abundant. This I promise you.

Labels: Ceres, Goddess of the Week

Ha! I had a mini-harvest this weekend, after months of planning and work. But it is indeed only the beginning :)

(Incidentally, as a celiac, Ceres would be my nemesis tee hee...)