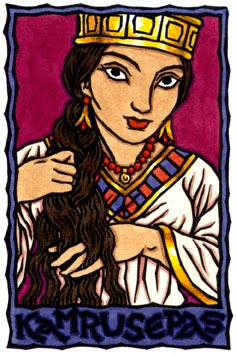 Well now. This is the fifth time Kamrusepas has come up. Kamrusepas the Hittite Goddess of magic and healing, She Who cured the God Telipinu's anger, She Who is said to heal paralysis by loosening that which is bound.

And all this time when She has come up for Goddess of the Week I have talked about how She is a healer Who heals primarily through kindness and compassion.

When the other Gods were faced with Telipinu's absence, They sent a bee to bring Him back. Finding Him asleep, the bee woke Him up by stinging the God on His hands and feet. This did not, and this is a shock, make Him any less angry. It was Kamrusepas, finally, Who was able to bring Telipinu (and the fertility of the land He had taken with Him) back into the fold, by casting powerful spells to make His anger go from Him.

Now, the first time I drew this card, I had not tracked down the story in which Kamrusepas heals paralysis; however I found a version of it tonight, from Images of Women in Antiquity edited by Averil Cameron and Amélie Kuhrt (essay on Hittite birth rituals by Jackie Pringle).

In this story, both the Great River and the Storm God have 'bound' up the land and its fertility, in much the same way the land suffered when Telipinu was lost. Affected are the fish, mountains, clouds, lions, the milk of the antelope and the water of the Great River itself. Kamrusepas, upon being told of this, drove Her chariot to the Great River and performed an incantation, in which She loosened all that had been bound, and the land was restored to fertility and health.

The same source has this to say about Kamrusepas' name (she is spelling it here without the final S):

If Kamrusepa's name, with its typical -sepa suffix indicating a 'genius', may be correctly derived with Laroche (1947) from the Hittite word kammara- 'smoke, haze', we may see her originally as the divinised concept of the sacrificial and cleansing smoke that rose to the sky from burnt offerings, and by extension, of the ritual itself and representative of its human performers.

One of the ways Kamrusepas heals in the legends is by transferring illness from the afflicted person to something else, for example wheat, which is then burnt as an offering, the original harmful energy being safely released in another form. She represents that energy of transformation, cleansing, and unbinding, all within a ritual context.

The ritual part is striking me as important here, and I am reminded, somewhat guiltily, that I as a Witch have not done a working spell in some time; or at least, not a formal one.

But then something else hits me: in all this time writing about and contemplating Kamrusepas, I am astonished to realize that I have never thought to ask this very obvious question:

She has been waiting politely all this time with a little smile on Her face, I can see it. All right, what do You have to say, Lady?

Ah, there we go. You are getting it now. Yes, that is it exactly. What is bound? When you can ask the correct question, you will get the correct answer. Just ask. I will unbind it, loosen it up, let the river flow again, easily, gently, with sweetness. This is about flow and about creating the space for good to flow into; bound is a word for full-up, stuck, tight and unmoving because there is nowhere for anything to go. What I do is exorcism, I suppose you could call it, if you wish to be dramatic. It is gentler than that, though, really, though do not mistake it as not powerful.

But yes. I am still keen on kindness, still wish to see it a part of your daily practice; and yes, I am here again as reminder. A gentle reminder.

But again, and this is important: if you can first see that which is bound, I can then loosen it. All you need do is ask.

What do you think? What within you is bound, especially in matters of health or anger? How might you go about loosening it? Can you think of some ideas for unbinding spells?
Posted by Thalia at 11:22 PM

Labels: Goddess of the Week, Kamrusepas

Browsing further through that Images of Women in Antiquity book I find an essay about women and witchcraft in ancient Assyria, and I came across this:

"The Maqlu [a series of incantation texts] ritual prescribes the burning of knots to release the magic."

I guess I'm wondering how to go about this, magically. Usually in knot magic you make the knot with the intent of putting something in it to store; then you untie it when you need it. This wouldn't quite be the same; it would be more making a knot to represent that which is already bound, not to bind something anew. Hmmmm.

"The magic" in that quote referring to a curse or spell put upon the victim by someone else.

I've lurked here for quite a while, and I just have to tell you that every card you've drawn for about the last month has hit me right in the gut---it's kind of eerie! Amazingly insightful, and very helpful. Thanks for all that you do.

As for unbinding spells, this is something I definitely want to think about---I've got some long-standing health issues that need to be resolved. I think the rituals associated with Kamrusepas are key---the idea of transference and sacrifice in order to cleanse.

andylibris - you're not the only one! It seems ever week for a couple of months now, I've received exactly what I need, without even knowing.

What's really amazing me is the progression of goddesses and how they relate to each other; how we've been through the valleys and out into the sun again, learning, developing, discovering. There is a definite process at work here... I sense it coming to a climax.

I know I am bound and have been asking for release. But from what?? Silly girl, ask the right questions! :) The old gods deal in specifics.

Thank you for your kind words, and I am so glad this is helping.

And me three, I guess, though I suppose the fact that I find these cards relevant isn't really surprising given that I'm the filter through which the interpretations are coming. I can't but help see them in light of my own issues.

My own binding is in the form of creative blocks which I've been slowly working through. Oh, wait, no, in my energy, my physical energy being bound (I though of that and heard a 'ding ding ding!' as in correct answer!). Ah.

I think I'm going to have to do some research on the magic, the intent behind burnt sacrifices, because I'm finding I don't really understand what the process is supposed to be. Is it changing something? Is it a gift to the Gods? If it is, how then can it be something bad, like the energy of an illness transferred? Why would They want that? Does it not matter? Is it just the energy behind it? What is the difference between a prayer (asking for help) and a sacrifice (something your own of value that you give up, as 'barter' for something else)?

I think that whatever you offer to the Gods is a worthy sacrifice, whether you deem it "good" or "bad". Just thinking for myself how tightly I have hung onto (and still do - sigh) blocks, pain, false beliefs etc. It IS a sacrifice to give those up! Discarding your own "protection" to trust completely in the outside forces to look after you. Maybe giving those things up is sometimes even more valuable than sacrificing something you love?

I am struggling with multiple creative blocks of varying magnitudes, and have been for years. Your thought of being physically bound is interesting...

Kirke's message last week was very difficult to grasp and I think your other readers felt the same way. This week, it's like a clue for those of us who didn't get it :)

Since first introduced many, many moons ago, I have had a special affinity for Kamrusepas. (The Big "K" -- the gentle, chiming laugh I hear understands I mean no disrespect.)

The way I see a spell of this nature is to bind up your very specific woe(s) into a knot -- or at the very least a folded crumpled paper -- mayhap tied with string. *Someone* says to make the tying up bit messy.

And then burn it as a transmutation of energy a deliberate shift from one form to another. You don't want a part of you burnt off (ouch!) relentlessly, just changed into raw resources. And/or something you can offer up pure of heart and clear of mind as a sacrifice.

So, thank you, dearest one. Your service is so much vaster than you may think.

to the Goddess' and Gods, seems simple. For US, it's stuck, for Her or them, it's just energy which they can transmute into other things, as, maybe with her help, can we, with our intention to let go, a ritual to work it into and out of our senses and Sense..Like the giving back into the Earth to transform things in our souls that no longer serve , or don'y know what to do now, between Samhain and Yule..
Thank you from heart for this Goddess, no accident here..For me it is the binding of old spells and history that I cannot yet find the way to unbind in me, though searching for so many years.. Half of my people came from Siberia near Mongolia, so maybe She'll listen...!
diolch am galon, Serentan

Hi Thalia, I just wanted to tell you what a big fan I am of your art, your site, and your blog! What you write is truly fascinating, and your art is totally original, gorgeous, and unique. Thanks for doing what you do, and for all the great info you share!! :) Blessed be, ~Phren