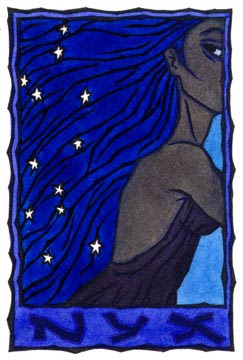 This week's pick is Nyx, the Greek Goddess of the night, which is what Her name means. She is is one of the primeval Deities called the Protogenoi, or First-born, Who include Deities like Gaea (Earth), Thalassa (the Sea), and Khronos (Time). She is daughter of Khaos and sister of Erebos (Darkness), by Whom She had a daughter Hemera (Day) and a son Aither (Light).

Nyx also gave birth to many children on Her own, without a father. As night is an ambiguous time that can be both restful and frightening, we find among Her offspring on the one hand Deities like the Moirai (the Fates, Klotho, Lakhesis and Atropos), Moros (Doom), Ker (Violent Death), Oizys (Woe), and Nemesis, and on the other hand gentler Deities like the Oneiroi (Dreams), the Hesperides (the four Goddesses of the evening), and the Goddess Philotes (Sex); though She is perhaps most famous for Her two sons Hypnos (Sleep) and Thanatos (Death, but the gentle kind).

She was said to have great black wings and to dress in dark colors; and She rode in a chariot drawn by black horses, the stars following behind Her.

She was an oracular Goddess, unsurprisingly, with an oracle at the Greek city of Megara, and She was invoked in witchcraft (or at least She was in Ovid's stories of Medea and Kirke).

I was rather surprised that She came up today, as this is the week of the summer solstice in my part of the world, when the sun is at its highest and strongest and the night is at its lowest ebb. I am not sure what to make of that, except maybe that it is a continuation of the theme that there is darkness to be found even in the times of greatest brightness. After all, at Yule time we focus on the light to be found in the time when the dark is most powerful; but at Midsummer we tend to focus entirely on the light.

But I don't think this is about the Year, really, and that long cycle of dark and light; Nyx is about the shorter cycles, the clockwork regularity of night and day. This is something smallish, something in your hand right now. What is changing over to the dark for you now?

She is also, I think, about the fertility of the dark and the night, the inspiration to be had in dreams and visions, even at this time of year, not usually considered the time to be going within. What have you been dreaming about? What visions have you had recently? What has your Night given birth to, both the frightening and the peaceful? What shadows are being cast by the bright light of Midsummer?

Also, within the darkness you hold in your hand right now, what is Sleep and what is Death? They are twins, it is true; but it is very important to discern one from the other now.

So I ask Her, as usual, What do You have to say to us?

I am darkness and mist, night and fog, confusion, the veiled stars, black, night as a presence. Not an absence of light, but a living thing unto itself; and this is a time of darkness now, whether you want to see it or not.

You always think the North is the only place in the world. I am here to remind you that it is, right now, Yule just as much as it is Midsummer. That is the darkness. That is the message of how to be complete. As the Earth is, always.

Not that I celebrate those holidays anyway; I'm Greek not a Celt after all. My summer festival is Skira, Sunshades. The year is not to be teased into points. That is just you humans wanting to make everything nice and neat, the year into eight equal wedges, eight separate pieces cut up into a chart, a paper folded, boundaries delineated. It is not as sharp, as defined, as you would like it to be. Get used to it.

Summer is summer; it is a plateau, not a point; you expect things to be in focus, to have a definite end and beginning. Who can say at what second night begins? It is a process, a blending, an in-between time, not a threshold or a point when everything changes, like a goal post you tag and then run the opposite way from.

I am here to tell you it is far murkier than you want it to be. It is primal, I am primal; and my children are powerful and ancient. I myself am born from chaos, literally, the swirling storm-clouds, the change and the potential for destruction and creation, tornado or gentle rain. You never can predict things, you know.

Take heed, look at my children. There are many of them, more than you have named; look at them all, see how They are present in your life. How have you given birth to Them yourself?

References again from Theoi, especially the article on Nyx.
Posted by Thalia at 11:26 PM

Labels: Goddess of the Week, Nyx

I love the stars in her dark blue hair!

I keep coming back to Nyx, and I'm still confused by her message; she doesn't give up her secrets easily. Don't seem to be able to meld her with the rest from the past few weeks... Maybe I need to re-evaluate her by herself.