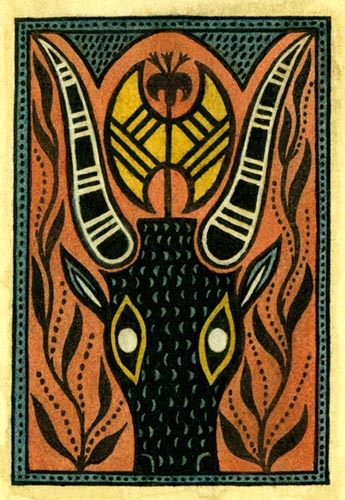 I've been on a bit of a Minoan/Mykenaean kick lately, and have been working my way through my local library's copies of Arthur Evan's The Palace of Minos at Knossos, which is in like a million volumes; I'm on the second one (part two). So I have been looking at these really lovely, crisp pen-and-ink drawings of artifacts, as well as the artifacts themselves a lot lately. This design, the bull's head and double axe, is straight from a Late Minoan jar. I rather like it, and the colors, which I chose in imitation of Minoan frescoes; though next time I think I'll use different paper. It's this matboard I have that is fine for watercolor or colored pencil, but a little too fibrous and linty for pen and ink, which scratches up the surface a bit too much.

In the process of doing this I had to clean out my pens, and for a while there could not find the special ink that goes in them; but in looking, I found a whole bunch of little teeny canvases I bought once upon a time, and pulled them out. Seriously, they're itty-bitty, four by five inches (though not as small as that drawing above, the original of which is two by three inches).

But I'm not that happy with what I came up with: 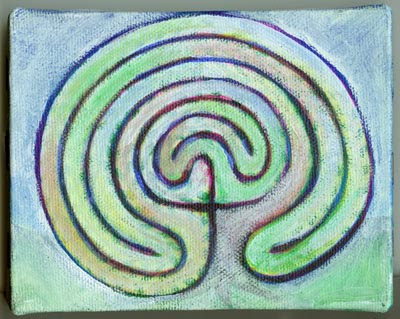 I think the proper word is meh. It started out quite promising, but the more I worked on it the less I liked it, and ended up painting over it with some white.

So though I liked that first one, altogether I'd say it was kind of a frustrating experience. I'm in some kind of transitional phase, art-wise, I think right now; and though I know the old way of doing things isn't really serving me anymore, I've no idea what the new way will be like, and I really feel like I am blundering about in the dark. More reason, I suppose, to keep at the Labyrinth imagery.

Also, and I hadn't applied this to my situation, both labrys (double axe) and bull's head are symbols of rebirth.
Posted by Thalia at 10:29 PM

And why are they symbols of rebirth, you ask? (Well, okay, you probably don't, but there is a reason I write about obscure Goddesses and the like; my brain is just fascinated by connections and cannot help but expound a bit.)

Because the double axe probably evolved from depictions of butterflies; and the bull's head? With the horns, it is a very similar shape to the uterus with fallopian tubes and ovaries. Interesting, no?

That is very interesting! I'm also fascinated by symbols and connections and obscure meanings etc. I love your Minoan art. Really cool!

Well, Thalia, since you ARE through this MInoan, labyrinth kick, do get yourself lost for a while... Maybe this is what these mazes are about... to puzzle you.

And I am sure Ariadne will pull you out for a dionisiac celebration in the end.

But I have to say I love the bull head.

The bull head/labrys is my new favorite Thalia Took creation.

(It's also my new desktop wallpaper. I'm enjoying it mightily.)

I think about the Labrys and its conecction with rebirth could come from its uses to sacrifices and rituals with this simbolism. I don'to know, just musing...

I keep thinking the labyrinth is related to the idea of Ariadne's dancing floor. I don't honestly know where the symbol originated; it's found all over the world if I'm remembering correctly and has a 'trick' to drawing it.

The labyrinth is also reminding me of coiled snakes (who shed their skin) or the baby in the womb with the umbilical cord. (More rebirth.)