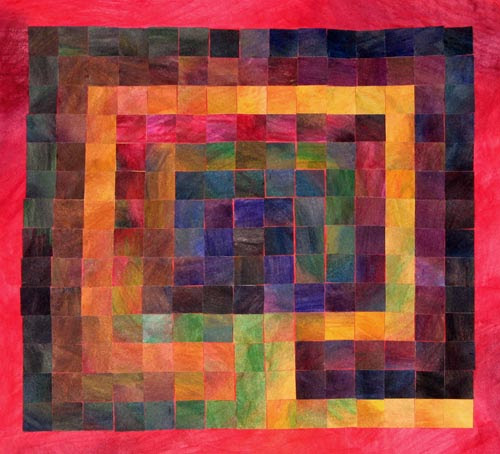 Well, I guess it's officially a series, then. This one was done by coloring in a sheet of watercolor paper with the Inktense pencils at random, then going over it with a wet brush to blend the colors. When that was dry I flipped it over and marked it off in a grid, then cut it up into one inch squares. Then I glued them on a red-colored piece of paper in a labyrinth pattern. I couldn't follow the path in order this time, though, as I was lazy and didn't mark a grid on the background paper, and I know if I were to have wung it it would have gotten very out of whack by the time I got to the middle, due to the principle of entropy. My original thought was that it was a paper version of making a quilt, and I thought myself quite clever; then I realized there was already a word for this sort of thing, mosaic, and I was a little disappointed. Ah well. There is really nothing new under the sun, is there?

I quite like how it came out. Also, the sheer hands-on craftiness of it (cutting and gluing paper) reminded me of stuff we'd do at art school. Stuff that was never quite up my alley, but I did anyway as they were assignments; and I realized that when left to my own devices I really do stick to what I know, and don't ever really just sit down and make something for the sake of making something. But my art, by which I mean the stuff I normally choose to do, the Goddesses and such, has been I felt in a bit of a rut lately, and it needs some shaking up.

Another thing I realized was that I didn't have to try to get something done every day for this Art Every Day Month thing. Because I usually do do something artsy each day; but my method of working has always tended towards a little here and a little there of several projects, not towards starting something and going at it until it's done. So instead of feeling I have to have something to show every day, I've given myself permission to post things when they're done. And as it is, since I'm usually doing a bunch of things at once things do tend to finish at the same time, for example: 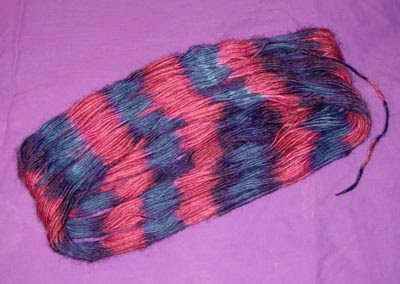 This is the tie-dyed skein I started the other day, after having sat in the pokeberry and vinegar solution for a couple days, then hanging up to dry for another couple, then finally getting rinsed and unwrapped to show the lovely patterning. I don't know what I'm going to do with it yet but I love the colors!
Posted by Thalia at 11:52 PM

Wonderful mosaic. It is very relaxing to look at... I'll bet it was relaxing to make too. Also like your died skein... very cool!

Wow! It actually dances with colour!
Quite beautiful as is the hank of yarn!

yes, it's a relief to know that you don't have to finish something everyday. some days just don't lend themselves to finishing, but making forward progress is good. love the way you created your 2nd labyrinth!

Thank you everyone. The more I look at this one the more I really really like it, the colors and the movement to it.

I love your mosaic! The colors are so rich and appealing.

I know what you mean about getting things done for AEDM. I work like you do - a little bit on several projects per day. At first I wanted to have something finished (however small) to post every day, but then I realized that that would probably lead to my larger projects getting neglected. So I'm doing a mix of both - I am posting every day, but it doesn't always have to be a finished piece. Sometimes it's just a little difference on a work in progress.