One Of Those Days

Today was just one of those impossible days. I was so pleased with myself last night, as I sat down to do some art, thinking I was all ahead of the game and everything, by doing today's entry then. I started out blacking in a clayboard, then scratching off a bunch; then I decided I didn't like it and scrubbed it off under the faucet, leaving a textured thing which I then colored in with ink and watercolor pencil, then I scratched some more off, and painted on top of the thing, and this and that, but I was never particularly satisfied with it. I spent two or three hours on it and ended up scrubbing it all off again, and I have nothing to show for it.

Today wasn't a whole lot better. It really was just one of those days, I think. I mean, not that one can really think with an antihistamine hangover; I spent most of the day feeling incredibly frustrated at just about everything. I never did think of something of a painterly/drawing type to do, though that had been my intent.

So I fell back on knitting. Though why I chose to start this particular project is beyond me, given the lack of coordination and spaceyness and twitchiness from the meds (though, hey, at least I wasn't sneezing!); and I was so frustrated I seriously considered poking my eyes out with the damned needles not once but twice. But anyway, here it is, the beginnings of a scarf: 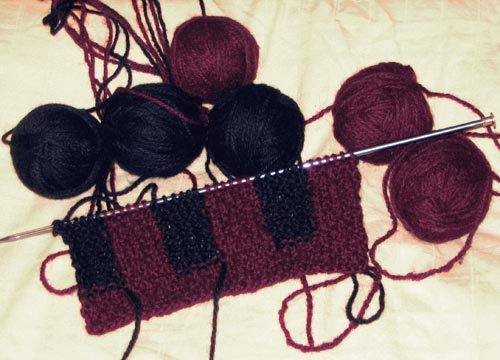 You will note that it is a particularly idiot thing to start on a day when one has no patience--it's in sand stitch, which requires a fair bit of concentration to keep straight when you're just doing it in one color and with only one "right" side, never mind when you've got two colors and you want to make it reversable. But then I had to do it in intarsia, which is why it's got six balls of yarn, as you switch off each color for each vertical stripe. Oy.

The yarn though is this nice wool I hand-dyed; the dark blue-black is logwood, the deep purple pokeberry.

Participating in Art Every Day Month is really making me realize how judgmental I am about what I count as art, or what I think is "good enough" to post where the world can see it. Even in spite of my aggravated mood, I also put in a good hour on the Goddess Oracle Deck book, and I dipped these two gorgeous wool/silk skeins of yarn in my fledgling indigo vat (making it three dips so far). The color is just amazing, this unbelievable complicated blue/green/indigo, with a lovely sheen to it from the silk. Ooooo, yummy. But my brain doesn't want to count either as "art," and has a hard enough time even with the scarf I started as it's a work in progress.

Although, wow, I have to say, now that I've uploaded it here and linked over on Leah's page I feel much better, like hey, I could go doodle something. Now that the pressure's off. That's funny.

I LOVE the colors on that! Beautiful!

It's funny how that works, isn't it? And you're not alone. Other people have been noticing their judgments while doing AEDM too. It's good to notice these things. It helps me if I can give myself permission to make "bad" art before I start. It tends to take the pressure off.

It is good to recognize these things.

I've given myself permission to just make cats for a month, if that's what I feel like doing. Who knows, I may open an Etsy shop. :)