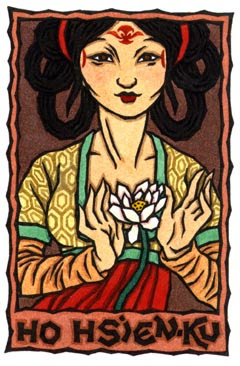 This week's card is Ho Hsien-Ku (also transliterated as Heh Xian-gu), one of the Taoist Eight Immortals (Pa Hsien or Ba Xien), Whose name means "Immortal Maiden Ho." The eight Immortals are a group of diverse Deities Who travel together, and have come to represent fortune and prosperity, much like the Seven Lucky Gods of Japan, Who count among them Benzaiten. Like Benzaiten, Ho Hsien-Ku is the only one of the group to be female (which apparently, is supposed to count as equal representation). Well, the only female of the group, that is, if you don't count Lan Ts'ai-Ho (Lan Caihe); you never can tell with Her/Him.

Ho Hsien-Ku was born a mortal (the daughter of a shopkeeper, by some accounts) who at the age of fifteen had a dream telling her that if she ground up a certain stone (mother-of-pearl or mica) and ate the powder she would become immortal. This she did, and spent Her days floating from mountaintop to mountaintop, collecting fruit to give to Her mother, eventually finding that She had no need of food Herself. In the end She disappeared entirely into the world of the Immortals, though She has been known to appear now and again to devotees on a cloud colorful as the sunset.

She is usually shown with the lotus, the flower representing an open heart; or She can be shown holding a peach, in Chinese myth the fruit of immortality.

As far as this week's reading goes, whatever your political views, this week America, at least, seems to have turned some kind of corner and a new spirit of hope and calmness has swept in. One, I think, that the entire world shares in to some extent now, since so much of what the US does has major repercussions for the rest of the planet. At least, I think I heard a collective sigh of relief, the gist of which was, Oh, thank Whoever! Maybe the US won't be such an @$$#*!& anymore! (To the world: I sincerely apologize for the behavior of the leaders of my country for the past eight years.)

The appearance of Ho Hsien-Ku accords with a time of openness and generosity, of hope and tolerance and a celebration of who we all are. Remember also that part of an open heart is an honest heart. Now, I think, is the time to both look around at where we are and how far we have come, and to appreciate and celebrate that, as well as to take an honest and non-judgmental look at the work that still needs to be done.

As one of the Eight Immortals, Ho Hsien-Ku is also a Goddess of prosperity and good fortune. May it be that we are entering into the beginning of a new time of good luck; though I don't think the economic woes of the nation and world will be turned around quickly, as the mess is a rather extensive one. At least now we have a new set of leaders, with a new set of tools, to try and fix things. I have hope.

So what does She say?

What do you think of this reading?

To read more about Ho Hsien-Ku, go here.
Posted by Thalia at 6:26 PM

With the election of our new administration this week Ho Hsien-Ku is the perfect representation of the hope that is sweeping the country, the positive changes we are facing and the promise that we now have a President for all of us. Absolutely wonderful!

Don´t worry about posting in English... if you did that in French, then it would be a problem.

If you have already been tagged, it is surely Ok... we just wanted to share our admiration to your blog and work...

If you want to make a silly meme about 6 favorite soap opera stars... feel free! We will follow that too! lol

Beverly, I know--it's funny looking back a week or two and seeing not just how appropriate an older Goddess post turned out to be, but also how similar themes have been in play across the Pagan blog-world. About the same time I picked Amaterasu, Hekate picked Judgment from the Robin Wood Tarot deck, which has a woman bursting out of a cauldron, re-born, with a pheonix in the background. Same idea as the sun rising, reborn.

Pietra--thanks. Ideas are floating about in the back of my brain. We'll see if something comes of it.