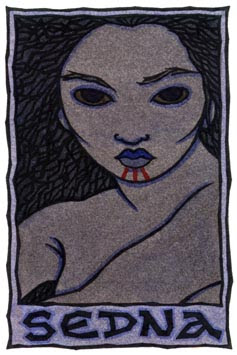 The Inuit, who live in the Arctic regions of North America, from Alaska to Greenland above the tree line, are popularly known as 'Eskimos'; however, this is generally considered a slur, as it means 'Foul eaters of raw meat' (a name given to them by the Algonquian Indians). 'Inuit' isn't quite right, either, as it's a little more narrow than 'Eskimo', but it is better, and I use it here. It derives from the word inua, meaning indwelling spirit.

Though most Great Goddesses are Earth Goddesses, Sedna is a Sea Goddess, which makes sense given the harsh climate that has forced the Inuit to turn to the Sea and its bounty to survive. As befits the Goddess of any Sea, but especially one so cold and harsh, Sedna is a mercurial, sometimes malevolent Goddess, Who can both give and withhold Her blessings.

The more well-known story of Sedna is from Greenland, where She is known as Nerrivik, a name which means 'Food-dish'. Nerrivik was once a lovely maiden who was reluctant to marry. She was finally persuaded by a handsome suitor; but when she went with him to his home she found she had been tricked, and he was a petrel-spirit in disguise. Her father and relatives found out, and rescued her; but on the way home the petrel-spirit raised a great storm which threatened to overturn their umiak (hunting canoe) and kill them all. In a panic and desperate to save himself, Sedna's father threw her overboard in an attempt to appease the petrel-spirit; but Sedna grabbed hold of the side of the umiak. Her father then took his axe and cut the ends of her fingers off. She still held on; he cut the rest of her fingers off. Still she held on, and he cut off her hands; unable to hold on anymore she then sank to the bottom of the Sea.

Her fingers and hands became the sea-animals, the seals, walruses, and whales; and Nerrivik became the Goddess of the Sea and ruler of the land of the dead.

A lesser-known story of Sedna is that She was the daughter of two giants and was born with an insatiable appetite. So insatiable and greedy was this appetite that Her parents were wakened one night to find their infant daughter attempting to eat them. Horrified at Her cannibalism, they took Her far out to Sea and threw Her overboard. Again, She clung to the side, and Her father mutilated Her, cutting off Her fingers, joints, and hands, which as above became the animals of the Sea.

When times are scarce, and the hunters cannot find any animals, the angakok or shaman of the people journeys to Her realm. This is a hard path, full of dangers, including an icy whirlpool and an abyss that can only be crossed on the edge of a knife, but if he or she makes it before Sedna, he or she then massages Her limbs and combs Her hair to soothe Her. If She is pleased, She can then be persuaded to tell the angakok one of two things: that She will send the animals, or that the angakok's people must move their settlement to another area.

The key, I think, in Her story is that though the environment is harsh and unforgiving, still, compassion plays a role. It is compassion that is given Her when the angakok combs Her tangled hair, as without hands She can no longer do it Herself. In some stories the angakok dances before Her, helping Her to forget Her harsh existence for a while.

Should you find yourself this week journeying to that dark cold realm inside you, remember to treat what you find there, the discarded, the hurt, the mutilated, with compassion.

Also, I think, have respect for those aspects of yourself, too. So often the metaphor is of going into the dark places and shining a light; this sounds in this case to be unnecessary, rude even, like suddenly shining a flashlight in someone else's eyes. Let your own eyes adjust in this case, and acclimate yourself to the dark. You will see more, and with more subtlety, if you do. Remember that though it is a part of you and you have the right to be there, that you are in some ways a guest, too. Do not just barge in and start demanding answers. Be respectful of what and who you find there.

She is the swell of the Sea, dark and huge; I can feel my body swaying, like you do after spending an afternoon swimming at the shore. She has dark eyes, like a seal, and does not smile.

You must understand, I did not give the animals freely. They were taken from me, and are mine, and I want them back, as I want the pieces hacked from me returned so that I may be made whole. You know this, you who discover truths; to live you must kill your brothers and sisters, the animals, the plants. You must kill me.

Though I endure. I am here at the bottom of the Sea, the cold, dark, icy Sea. Do you not think I have died? This realm is the realm of the Dead, is it not? How should I be here but that I am also dead, and that my injuries, my mutilation, have killed me? Does that not also mean that the animals who were my fingers, my joints, my hands, are all that is left of me alive?

You see why I do not let them go easily.

Native American Myth and Legend: An A-Z of People and Places, by Mike Dixon-Kennedy
Posted by Thalia at 11:14 PM

Labels: Goddess of the Week, Sedna

Interesting that Sedna should show up the same week as the "census of the sea" is announced! Inventory is being taken of Her domain.

I heard another myth that She refused to marry any of her suitors and instead married a dog. The men were so angered that they took Her out to sea where they cut Her hands and fingers off when she tried to grip the boat.