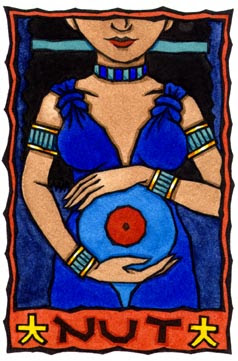 Nut is the ancient Egyptian Sky-Goddess; this is Her second appearance here, the first being last Valentine's Day (or Lupercalia Eve, if you prefer). She is one of the nine primeval Deities of the creation myths of Heliopolis. (Though the name Heliopolis is the one usually used, it is the Greek one; the old Egyptian name was Iunu Mehet or On. It is the modern Tell Hisn, a suburb of Cairo now). Several regions or cities in ancient Egypt had their own creation myths; in Iunu Mehet the story went like this:

In the beginning of days there was only Nun, the watery abyss, Whom the Egyptians called the 'eldest father'; out of Nun the Sun-God Atum emerged. Atum then created a mound of silt, which was the first land; after this He created two Deities, the Air-God Shu ('Dry'), and the Moisture-Goddess Tefnut ('Moisture'). From these two were then born another pair, Geb, the Earth God, and Nut, the Sky Goddess.

Geb and Nut then coupled, quite passionately.

In a slightly different strand of the myth, the Sun God Re (also of Heliopolis, and equated with Atum) then had Them forcibly separated by Their father Shu, the air, for He feared being overthrown by Their children. He further cursed Nut, and forbid Her from giving birth on any day of the year.

Luckily Thoth (Tehuti), the very clever God of Scribes, made a bet with the Moon and won, thereby gaining enough light to create five more days, bringing the total to 365 when it had been a nice even 360, or twelve months of thirty days each. (Of course 365 days is not the actual length of the year, it being more like 365.25 days, and they knew it; but the ancient Egyptians loved their round numbers and their order so much that, honestly, they kind of just let it slide). So Nut was able to give birth at last, and bore Osiris, Isis, Seth, Nephthys, and the elder Horus. Nut and Her five children, plus Geb, Tefnut and Shu, were considered the Heliopolitan Ennead ('group of nine Gods of Heliopolis').

Not counting Nun, apparently, and not naming the mound as the first bit of dry land, either, oddly enough.

As Sky Goddess Nut was said to swallow the Sun each night and give birth to it the next morning, making Her body, though the sky, in some ways a form of the Underworld; She was sometimes depicted as a sow, as they bear innumerable young (here equated with the stars) and have a reputation as cannibals who eat their young, as Nut alternately swallows the Sun (to bring night) and the stars (when it is day).

This week then is about waiting, pregnancy, and the anticipation of a good thing, I think, even if (like me) you have no desire ever ever ever to become literally pregnant yourself (or if, you know, you're a dude or something). Something Wonderful is coming—it is, in fact, just around the corner. The best part is that it's not something out of the blue, but something you have been working towards for some time that is about to bear luscious fruit.

Not, incidentally, that you need to do much about it at this point; it is, pretty much, inevitable that it comes at the appointed time. And that means whether you work at it or not at this point. Sure, keeping the momentum going is a good thing; but if you are tired or worn out, know that if you are unable to keep up your former pace now it will make little difference.

You may not even know you have been doing this work, incidentally. It may be one of those things that have been working themselves out on a deep dream-level, in your unconscious mind; perhaps something along the line of realizations about past circumstances that give you a new strength and purpose.

Just relax, and let it come, and be its own thing. Though like a child, it will almost certainly not be quite what you think it will be.

You are all my children. You are all born from me, as innumerable as the stars; and when your long day-life is over you will all come back to me, stars and gods and humans, devoured by the dark to be reborn sure as sunrise. Always devouring, always giving birth; it is the way of things, to be dark and light, joyous and fearful in their times. Though the fear is not really necessary, you know.

Granddaughter of the Void, they say; and I bear His nature, never forget.

ah! beautiful, i like her and her cycles of light and dark..she brings hope, and calm...

hi:) i pop in here often, although havent left a comment before now, love your artwork and words of inspiration..really enjoy reading goddess of the week.

"Granddaughter of the Void" -- now THERE'S a title! Nice.

Welcome back -- I hope you had a good time while you were away!