I am in the middle of rethinking what I want to do with that Goddess deck of mine. I mean, not to worry, I still plan to publish, finish the book, &c but lately I've been looking at the thing as a whole, trying to bring it into some kind of balance. To that end I've decided to swap a few cards out, mostly the monotheistic sorts, to make room for some other Goddesses. First one so far: I'm switching the Black Virgin out, and replacing her with Kybele. Here She is: 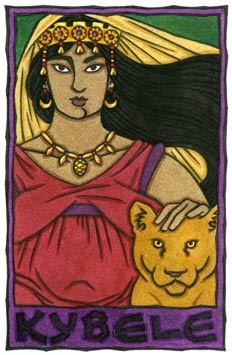 My version of the Black Virgin had strong elements of Kybele anyway, but I think I'd rather have the real thing. I did most of this last week sometime, then put it down, not sure if I liked it; but tonight I went back in and finished it, tweaking the colors and putting in those darker outliney sort of shadows. It's amazing to me how those little shadows always make the thing look dramatically better. It's exponential, I swear.

So, this Kybele (I'm using the Greek spelling rather than the Roman 'Cybele') is sort of a combination of the Roman imagery, which usually shows Her enthroned with a lion, and the very very very ancient and startlingly similar image of the Neolithic Goddess from Çatal Höyük (from, seriously, 6000-5500 BCE), thus: 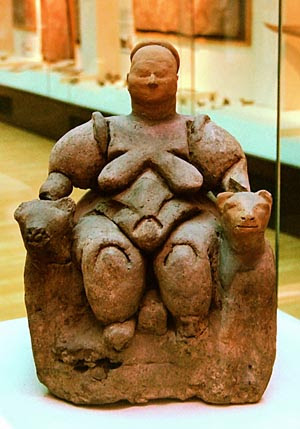 (Image from Wikipedia, by one Roweromaniak)

I do like Her (and I like Her more the longer it goes), but I'm not sure if She's quite rattle rattle BOOM!! enough. It's a little weird; Kybele has a reputation for wildness, but all the statues of Her (the Roman ones, anyway) are very staid and proper looking, with the stately pose, the throne, and the mural crown. So it's a little tricky.

I always think in her as grandmother of Dionysus. She healead him from the madness, teaching Her mysteries to the young god and protecting Dionysus, even assembling people to enter his army against the indians.

A Jess of Some Sort said...

I you keep the picture of Mary Magdalene; it's such a beautiful picture- it shows her heartbreak perfectly.

A Jess of Some Sort said...

Sorry- I meant to say I hope you keep the picture of Mary Magdalene.

Ooooh. She is awesome. I love her!

Hey I just realized--I usually interpret the Black Madonna (the card Kybele is replacing) as the old underneath the new--i.e., the Black Madonna taps into an older stream of belief, since She's associated with older sites where Goddesses were worshiped, one Goddess being Kybele. And so here's Kybele Herself now as replacement, but Her depiction is referring to an even older Goddess, which, though we can't know for sure if the one grew out of the other, still gives the card roughly the same meaning. Huh. Totally not on purpose. (For what that's worth!)

Whoops, should probably mention that Kybele is from Asia Minor (modern Turkey), which is also where Catal Hoyuk is too, so it's not that far-fetched that the Neolithic Goddess with the lions might be a forerunner of Kybele.

Will Kamrusepas be in the deck? Love her. :)

Love all that you've created, actually. Can't wait for the finished product.

I think the new card looks wonderful, and I'm glad you're including some more goddesses from pre-history. I hope you'll consider adding a Pre-Greek Cretan goddess, such as "Atana Potnia" of Knossos.

Atana Potinija, you mean. :) And don't you just know how to get on my good side, Anonymous. I'm such an Athena fan.

But anyway as for Kretan Goddesses, I already have Ariadne, the Lady of the Labyrinth.

Kybele is a favourite Goddess of mine, since she is so closely associated with drumming.

So beautiful! You really do have a gift. Though I hope you keep Magdalene...:D

Gorgeous! I'm so eager for this deck to be published. Your artwork is absolutely stunning.