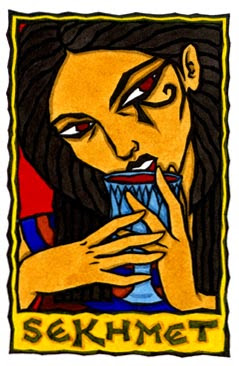 This is Sekhmet's second appearance so far; She last came up more than a year ago, in December 2008. She is one of Egypt's lioness Goddesses, and represents the fierce heat of the Sun.

Her name means 'the Powerful One' or 'the Violent One'; She is also called Nesert, 'Flame.' She is part of a triad of Deities centered on the city of Memphis, with Ptah, Her husband, a creator God and patron God of craftsmen, and Their son Nefertum, the Sun as the emerging lotus blossom.

I wrote about Her usual legend, in which She is an instrument of revenge against humankind, in the earlier post; in addition to Her ferocious and bloodthirsty ways, consonant with Her form as a lioness, She is also considered a bringer of plague or disease, especially fevers, since She is associated with fire and the Sun.

Which of course then connects Her with healing, since a Goddess Who brings disease can also prevent it--if She may be prevailed upon, that is. And in fact Her priests practiced healing magic and medicine, such that the title 'Priest of Sekhmet' came to mean 'doctor.'

In Late Period Egypt, the deified human Imhotep was adopted as Ptah's son. Though in real life he had been a vizier and architect, the one who designed Djoser's Step Pyramid, as a God Imhotep was known for His great healing powers, such that the Greeks associated Him with their Asklepios. Though not said to be Sekhmet's son, Her association with healing and medicine may well have played a part in His adoption into that family of Deities.

This week then, I think the theme of healing will continue; though of an altogether different sort--for last week was healing through water, while this week is through fire. I think, also, it will be more about casting out the bad than invoking the good, if that makes sense. At any rate the former must be done first to make room for the latter.

Let's see what She says:

Fire, fire, fire. Beat down the sun I wade in blood up to my knees, the blasphemers, the liars, the slanderers, all cut down before me, before my red red rage. Red for fire, red for blood. It is in the blood, the fire. Red, it is red now!

I don't know that I am a healer, or maybe it doesn't matter. What matters is my power over that which harms. I choose. It is up to me.

It is up to you, too, for you have this power as well. Remember that!

The Atlas of Ancient Egypt, by John Baines and Jaromír Málek
Posted by Thalia at 7:50 PM

Or, last week was night healing, and this week is day healing.

Sekhmet resonates strongly with me at the moment, as I'm home recuperating from surgery. She was one of the healing Goddesses I called upon during my surgery (in addition to Brigid and Hygeia). I like your interpretation. And yes, heat can heal -- for example, if you have a bad back or some other aches/pains that feel better with heat!

That's very true. I'm especially aware of this today because I woke up with a mildly cricked neck.

Also reiki, since your hands heat up.