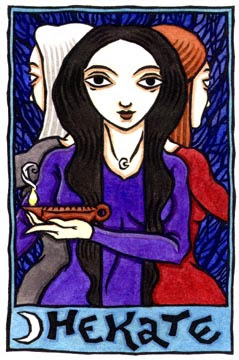 Hekate last came up eleven months ago, in full riot of May. I have to admit that I find it strange that a Goddess of the Dark should keep coming up in Spring. Last time She spoke of tempering the light and growth with a little bit of darkness; it is good, I suppose, to remember that the light grows from the darkness, as the flowers of spring grow out of the dark earth. All that has come before us, the visions, the dark times, our Underworld journeys, have contributed to the glory we create and we are.

Hekate is a Greek Goddess, said to be of Thrakian origin (parts of modern Greece, Bulgaria and Turkey). She is a Titaness, one of the older race of Deities, the daughter of Asteria ('Starry One') and Perses ('Destroyer'). Sometimes Nyx, the Goddess of night, is said to be Her mother instead of Asteria; at any rate She is associated with the night sky.

In the war against the Titanes She is said to have sided with the Olympian Deities; this is the reason given for why, after the Titanes were overthrown, She was still given honors by Zeus, Who allowed Her to keep Her power over the realms of sea, sky, and earth (including that under the earth). I mean, that's the spin that's been put on it, anyway. The Titanes were said to have been cast into Tartaros, the Underworld; but as that was one of Hekate's realms already, how should casting Her there take away Her power? So I have my doubts.

At any rate Hekate always maintained a certain independence, an apartness from the other Deities; when Kore was taken away to the Underworld, few save Hekate helped Demeter in Her search. They were all too afraid of Zeus.

Hekate is associated with the Moon, especially the dark Moon; and She was said in late times to be an eerie sort, walking the night trailing spectral hounds and ghosts. She is a Goddess of witchcraft and the night, of herbs and spells. She is also accorded a psychopomp, one Who guides the soul to the Underworld, much as Hermes does, and in fact She is occasionally said to be His consort, in His guise as Hermes Khthonios, Hermes of the Underworld.

But She also leads the soul out of the Underworld. For though Kore must spend part of the year in the Underworld as Queen Persephone, Hekate remains with Her as minister and adviser. And when the Maiden returns to the upper world to be greeted by the full glory of Spring, Hekate brings Her forth into the light.

She is also the Goddess of crossroads, especially those where three roads meet, and She was given offerings at little shrines at some of them; and She is said, also, to protect the lonely traveler on dark roads. Which is why I think I have always found Her somewhat comforting, though it is very much at odds with Her ghosty reputation. But choices, and the path trodden, and being able to see in the dark: that is what Hekate is about.

And what turnings has that, is that, journey taken or taking? What crossroads have you, do you, face? Where three roads meet, remember there are two choices forward, and always, one choice back.

Firm your feet on the ground. In the stillness of night the wind dies down. Listen now. Scent the air. Be not afraid. I am here, and you are with me. We are akin, you and I, if you call yourself Witch; I will guide and protect. Call on me and I will help you.

Now look. What else is with you in the dark? You bring something with you, always. That may be good or bad, depending on what it is. Look.

But know that to be reborn you must always die first. The serpent sheds Her skin; do you think this is painless? It is hard, it is always hard. This is as it must be. But I am here, and I am a Guide in the place between.

Where do you wish to go?

References: the ever-excellent Theoi, of course.
Posted by Thalia at 7:00 PM

It is not surprising that She makes Herself known at this time of year. She led Persephone back from the Underworld, lighting the way with Her torches. the return of Persephone heralds the return of growth and light, the end of the dormant winter. Your painting of Hekate is lovely.

Hecate is the only deity who helped Demeter after the abduction of Persephone. Only She was not afraid of Hades' power. That says it all right there!

Child of Hekate,
sweetness and light?
Where is the mark
of your entombment?
Buried prematurely,
to strive for growth
in dark enclosure
striving for a breath
of the pompously negligent
Sun,
of the blushing Moon
of the squabbling sons and daughters,
of daylight's pleasures.
Striving, tenderly
twisting around corners
aching for an unknown touch.

"Tell me, sir, then, how's it going now?"
Looking up narrowly from a tepid meal,
all at once remembering
playfellows on the schoolyard
running, out of breath,
filled with pride
a jolly good game.
Always someone begging
my attention,
but it wasn't really me,
just a story to steam off
or a butt to joke on.
All the silly give and take;
only time is taken
and that in big hungry chunks
of no tomorrows.

One long day
now the part all groggy
waking from fevered napping.
It wasn't supposed to be a tomb
nestled in Transylvanian bloodlines.
It was meant to be a child's cot,
freshly laundered cotton lace.
But the rats got in,
once the cats had been slaughtered.

Slowly wakening
I strive again to find my footing.
Learning to walk
was never as easy
as forgetting to fly.