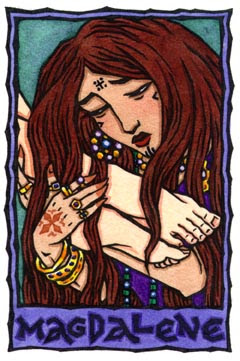 Well here we are again, with Mary Magdalene, Who came up for the first time just three weeks ago; between Her and the permutations of Faerie, we seem to be caught in some kind of eddy.

As I mentioned in the previous post, Mary Magdalene was one of the disciples of Jesus, much beloved of Him and the first to see Him after His resurrection. She was often confused with Mary of Bethany and various other Marys of the Bible, so that it is a little hard to make out Her original story. In some traditions, Mary Magdalene is the one Who anointed Jesus with costly spikenard; in others, that was Mary of Bethany.

Mary Magdalene has accumulated a fair bit of extra-biblical legends, including one that had Her, two other Marys, and their servant Sarah arriving in the south of France. After converting all of Provence, Mary Magdalene retired to a cave in the hills near Marseille, where She lived as a hermit for thirty years until Her death. The cave is now called la Sainte-Baume ('the Holy Cave'), and is a pilgrimage site.

I guess the message this week is to keep digging, keep meandering, keep contemplating. Dig deeper, rework, practice variations on a theme; there is something there of great value that cannot be found in a surface search. Stay with this. It will prove rewarding.

It is still the season of darkness, though Imbolc is a holiday of finally being able to see the light at the end of the tunnel; this card this week I think reminds us that there are after all six more weeks of winter. There is still time to reflect, dream, and prepare the soil for the seeds we will plant. Do not be in too much of a hurry to quit the dark.

Pay attention to your dreams this week; to the spring welling up in the high, dark, cave. Look into those dark places, and see what is old and what is new there. Brush the leaf-mould aside and find the shoots of springtime's flowers, coming up at last into the air and the light.

I am the woman with the alabastron, the vase that holds the oil to anoint the new Dead. Something is newly dead. Bless it; let it go. Bury it, close it up in the Earth. It will be renewed. When it reemerges, tend to it. You will know how; this is women's work and craft, something deep in our bones. Act as priestess as it crosses and recrosses between that world and this. Watch with your eyes open.

And be yourself blessed.

I think it comes down to helping the Wheel turn. What do you think?
Posted by Thalia at 8:47 PM

Helping the Wheel turn? Sounds good to me!