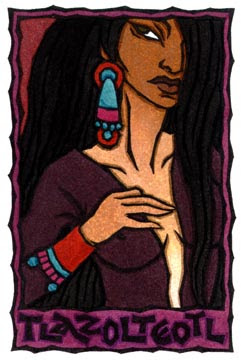 Tlazolteotl is an Aztec Earth and Mother Goddess, Whose name is sometimes glossed specifically to 'Dirt' Goddess, or even 'Filth' Goddess. She is a both a Goddess of lust and sexual impurity, and a Goddess of purification and cleansing.

And so She both inspires and absolves sins. She had the ability, if the proper rituals were followed, to pardon a petitioner absolutely; and this pardon even extended into the world of law, for the petitioner was also freed from the legal consequences of his/her sinful actions.

Now, I have included Aztec Goddesses as part of my Goddess Oracle Deck because to not do so would be a slight and an offense; but I will confess they make me rather nervous. Because, in addition to such innocuous things as being the patroness of spinning, Tlazolteotl, as a Goddess of the Earth and renewal, required the sacrifice of a handsome young man every year. After he was killed, his body was flayed and his skin wrapped around a statue of the Goddess.

And so a common representation of Tlazolteotl is as a woman giving birth while wearing the flayed skin of a human being over Her own. It is a quintessentially Aztec symbol of renewal and springtime, which draws, I assume, on such phenomena as the snake shedding its skin. Though nowadays it is only metaphor, still, once it was taken quite literally; and I just can't get my modern American brain around it. Which, I guess, is not necessarily a bad thing.

I think, though, that this card's message this week is a reminder that some things, some changes, some renewals are only had through blood and sacrifice. Birth was, until recently, a very dangerous prospect, one many women did not survive; and even though modern techniques can handle things better if something goes wrong, the process itself has not changed. Babies aren't any smaller, or women's hips any larger, than they ever have been; and there is still much blood and pain involved.

This is not usually how I read things. I have had to do a lot of work with fear, personally, and my motto in the recent past has been one of kindness and allowing myself to not do something if I am uncomfortable or afraid. But then, this isn't just about me, since I asked advice for the world. Some things, this card would seem to be telling us, have to be done the old fashioned way, and require walking the hard road. Whatever it is this week, whatever is being born or reborn, it would seem, this is the path.

It is well to remember, also, that one cannot, actually, sacrifice another. It must be something of your own that is offered.

What does She say to the World?

Blood, blood, blood, it all ends and begins in blood. You think that is frightening, dark, pagan, evil?

But yes. Shedding your skin is painful, and rightly so. It is a newness, a softness, a vulnerability in this hard world. But it is necessary. And it is especially necessary now.

Peel that old skin away. Dig your nails into it, as you dig your nails into the Earth to plant a seed. For it is this Earth, also, Who is shedding Her skin. You do not believe this? Look around you. Change has begun, and cannot be stopped. You can sacrifice the old to keep up with it, or you can remain trapped and suffocating and unable to see. Which do you think will be less painful in the long run?

Labels: Goddess of the Week, Tlazolteotl

Sort of reminds me of what Pele is about -- in order for new creations, you must first destroy something else, which is painful.

Dammit I hate this prophetic stuff.

Birth and hard work and destruction of the old. Oh for fucking out Christ.

Love it! My word verification below [sic] is "vagis"...!
The first thing that came to mind is simply the blood that cleans us, that we let go of during the moontimes. Saw written and said, yes, of COURSE, THAT's it, that many of the tales of sacrifice were to do with the giving of our menstrual or birth bloods, that men were frightened of, or jealous at the giving of blood without wounded, without being cut or hurt directly, why when the patriarchisalization came on, the giving of our life-creating blood back to the earth was turned into killing instead. (Anything you can do, I can do "better"!)

The letting go, I also find, DOESN'T always hurt, sometimes it is just wonderful, at LAST! LIke the letting go of fear, no, no longer obliged to have it, keep it, store it etc...
Wherever your fears came from in your herstory, may they melt surely and gently away, after telling their story to teach..

So, I came into April of the blog to see if htere had been one for my birthday, the 13th..
maybe next year!

Blessèd be,
and good play to you,
Sido