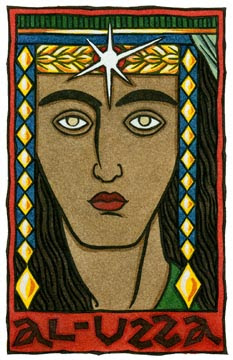 Here's the re-do I did a couple weeks ago now. The design of Her is inspired by this baetyl from Petra. (The earlier version is here.)

It's funny how there are certain Goddesses I've drawn more often than others. I mean, sure, I have three (or four, if you count the Gorgon Sthenno) renditions of Athena now, but that's because I'm still consciously on an Athena kick. What I'm finding interesting are the Goddesses Whom I am not consciously choosing to draw repeatedly. For example this is the third time, now, I've done some al-Uzza artwork; though the all-time record I think goes to Brighid, Whom I've depicted at least five or six times now. Yet I wouldn't say She's my patroness Goddess. Perhaps I need to rethink that a bit.
Posted by Thalia at 12:01 AM

Sometimes, They help us changing perceptions... and we build a new concept, a new idea... I love this al-Uzza... Her eyes are a killer!