As They Have Always Done

I don't know how I got there. I know I followed a link from some Pagan blog or other; at any rate I ended up at the Archaeology Magazine website reading an article about the ancient Egyptian priestess Meresamun.

And not just about her, as in her tomb, or an inscription mentioning her, but her, she herself: for the article is about her mummy, literally her body.

She lived in a late period, relatively speaking, of ancient Egyptian history; and after she was mummified she was not then laid to rest in a separate coffin (or coffins), but encased directly in layers of plaster and linen (which substance is called cartonnage) which cannot be separated from her mummy, since no one (rightly) has the heart to destroy the casing, as it is wondrous beautiful. (Very clever, O ancient Egyptians.)

So, and this is one of the reasons for the article, the curators at her museum took her to a Chicago hospital to have her scanned by their super-duper state-of-the-art brandy new CT scanner; and this required transporting her there.

Now, the results of the scans are quite interesting, and I recommend you check out the link above; but two of the photos moved me so much I nearly wept.

(I don't seem to be able to link directly to the individual photos, as they've got some kind of Flashish whistles and bells going on on that site, so I will reproduce the little thumbnails here. I believe, and I did look this up, that this constitutes fair use. They are taken by photographer Anna Ressman. Do please check the full-sized pictures out.)

The first is of Meresamun's mummy packed up into a crate, ready to be transported to the hospital:

I know it's little, but can you see that? They've painted a pair of wedjat eyes on the side of the crate. As it explains in the caption, wedjat eyes were often depicted on the side of Egyptian coffins, as they were believed to allow the mummy to see out. This is the picture that nearly made me cry. It was just so kind, and so respectful of the long-dead Meresamun and her beliefs.

But this one, this picture just stunned me:

It is of two of the "exhibition designers" securing Meresamun's mummy/coffin to the bed of the CT scanner with, of course, linen straps. But do you know what it looks like? 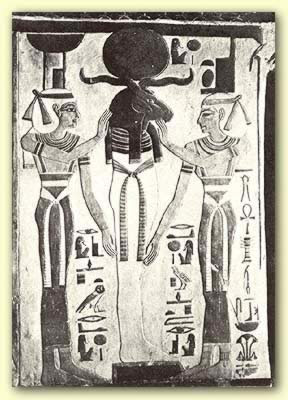 It's Isis and Nephthys, the Two Kites, doing as They have always done, protecting the dead.
Posted by Thalia at 12:24 AM

That sent some shivers down my spine too.

How lovingly and delicately they treat her. Beautiful. :)