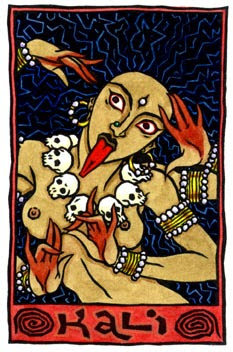 Well, last week before I picked the card which would turn out to be Morgana, I thought for a moment, and tried to guess, or predict, Who it would be. And I came up with black, black black black. And I thought, Oh, Kali.

But it was Morgana, for whatever reason.

And now here Kali is. I guess I was off by a week.

She is a Hindu Goddess of destruction, death, blood, disorder, and that which is outside of order and civilization. One meaning of Her name is 'The Black One', and She is always said to be black or dark. She was the first card I did, apparently out of nowhere, when I knew very little of Her, and before I had any idea that I would be doing an entire card deck of Goddesses; She should properly be much darker in Her skin tone. I apologize.

Kali is said to have been born of the wrath of a Goddess, either Durga, Parvati, or Sati, depending on the tale. As Their personified rage, She is so powerful and out of control in Her bloodlust that She threatens to destroy the world.

There are many tales of Kali involving Her frenzied behavior on the battlefield. Like Sekhmet of the Egyptians She is said to go into a battle fury and gleefully drink the blood of Her enemies, or anyone in Her way, really. Only Shiva, often Her husband, and no stranger to chaos Himself, has the power to calm Her, either by lying down in Her path and pretending to be a corpse, or by taking the form of a wailing baby. Either way, He attracts Kali's attention, and stirs Her compassion, so that She is calmed.

As Kali She is described as wild and dangerous, bloodthirsty and violent. She is depicted naked and emaciated, with fangs, claws, and a long lolling tongue; Her skirt is made of cut-off arms, Her necklace of skulls or severed heads, and Her earrings are the corpses of infants.

In Tantrism, She is very highly venerated as the primordial shakti, the female creative principle. In the Mahanirvana-tantra, Shiva says:

Thou art Kali, the original form of all things... Resuming after Dissolution Thine own form, dark and formless, Thou alone remainest as One ineffable and inconceivable. Though having a form, yet art Thou formless; though Thyself without beginning, multiform by the power of Maya, Thou art the Beginning of all, Creatrix, Protectress, and Destructress.

And in the Nirvana-tantra, Kali is described in terms of the primeval ocean: She is like all the waters of the sea, and Shiva, Vishnu and Brahma are merely the water filling the hoofprint of a cow; and from Her those three arise like bubbles from the ocean's depths.

She is underlying reality, in all its mess, blood, disorder, and death. Yet She must be made peace with, and must be accepted, to be whole and to achieve salvation and enlightenment in Tantrism. She is a reminder that our desire for order goes against the nature of life itself.

So this week? Well, I won't lie. This is big stuff. Big ugly stuff, that is of necessity also truth. How well you are able to deal with it, face it down, accept and even love that ugliness will determine how well you do with it, and what you learn from it. There is powerful knowledge and wisdom here, remember.

Now. What does She say?

The Void is not nothing; that is the irony, the mystery at its heart. It is all potential, all material, all that is, waiting to be born, to be manifested. Yet until it is it is nothing. That is the mystery; that it is nothing, and everything, at the same time.

I am not that frightening. Or, well, maybe I am; but you will have to get over that. It is inevitable, you know, that you come back to Me. It is not something you can escape.

But take heart; you have come home to me many many times. This death is not your first. You are an old hand at dying, really.

And at any rate you do it all the time, don't you? For I am here now.

She reminds me of that quotation that when you look into the abyss, the abyss looks back into you. Also of the one that says the Divine is not met on the mountaintop -- the Divine is met in the abyss. My, I'm in a quotey mood this morning.

Inexplicable death of a long-time friendship this week, so yeah, feeling that energy.:P

I love Kali. You know, she is also known as a Mother Goddess to many, particularly Ramakrishna. Though, as I have heard, she is the mother who pushes her children to do their best, even if they hate it. It's for our own good <3