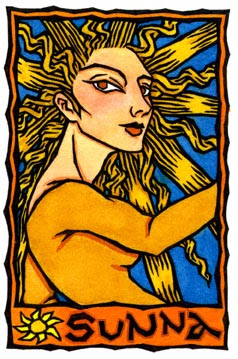 This is the first time the Germanic Sun Goddess Sunna has come up; appropriately enough up here in the north the summer is just getting started. The sun is high and what is usually the hottest month of the year has begun.

Sunna is the personified sun in Germanic myth, and Her name, as you may have guessed, means 'Sun'; She is said to be the sister of the Goddess Sinthgunt, about Whom not a whole lot is known, though She may be either a Moon or Star Goddess (the former being problematic as the Moon was generally thought to be male in the Germanic/Norse system). Both of them are mentioned in the Merseburg Incantations, medieval German magic spells from the ninth or tenth centuries; in them the sisters, with Frija, Volla, and Wodan (Freja, probably Fulla, and Odin) cure the horse of Phol (possibly Baldr), which had sprained its foot. So Sunna, then, was at least thought to be skilled in magic, and to have healing powers.

In closely related Norse mythology, the Sun Goddess is called Sól, which also means 'Sun'. Here is Her tale:

At the very beginning of things was Ginnungagap, the Abyss; it held at once everything and nothing. Out of the void came Yggdrasil, the World Tree; self-created, it would run through the center of all the nine worlds.

At Yggdrasil's southernmost root was Múspellheimr, a land of heat and fire, from which embers constantly drifted; these embers in turn melted the ice of Ginnungagap, and the quickened steam and water became the first of the frost giants, Ymir. At the same time a cow, Audhumla, was created; She fed Ymir with Her milk, and licked at the salty blocks of ice, within which was another creature, Buri, the ancestor of the Gods. After three days licking Buri was wholly freed of ice; but in this time the sleeping Ymir had created both the first humans (in this version, anyway) and a six-headed son named Þrúðgelmir, Who then 'gave birth' to Bergelmir, the ancestor of the frost giants.

Buri also had been busy, and had had a son, Börr; the two lines, then, frost giants and proto-Gods set themselves at war, as is perhaps inevitable in Norse mythology. The war lasted for the usual mythical aeons, but then a giantess named Bestla married Börr and by Him had three sons: Odin, Vili, and Ve. With Their help Ymir was killed; and from Ymir's body Odin, Vili, and Ve created our world, Midgard, the world of mortals. And, and this is where this all becomes relevant, from the brightest of the embers of Múspellheimr, They created Máni, the Moon, and Sól, the Sun.

Máni and Sól were then charged with driving the Moon and Sun across the heavens in chariots. Sól's chariot is drawn by two horses called Árvakr ('Early Awake') and Alsviðr ('Very Quick'), but like Her brother She is pursued by a wolf; at times he nearly catches up with Her, which is said to cause eclipses. It is foretold (or has already come to pass) that at Ragnarok the wolves will catch up with Them and destroy the Moon and the Sun.

I will note that as is annoyingly usual in some patriarchal creation myths, the female element has in large part been disappeared. Þrúðgelmir, after all, cannot 'give birth' alone, can He? And if 'He' did then by definition He's a She, isn't S/He? I know, pesky logic. The Norse myths were written down for the most part fairly late, at least a couple centuries after the lands had already been Christianized; like Welsh myth, it can be hard to discern the underlying layers (and I am no expert in Norse myth, trust me). So I don't know if there is something more under there. It is, certainly, a heavily Indo-European tradition, which makes it especially remarkable that the Sun is coded as female and the Moon male. At any rate.

I very much want to interpret this card as a positive sign, of rising fortunes and brighter times this week; but I keep coming back to the fact that this is Norse myth, where the warmth never lasts and all the world begins and ends in ice. However, I suppose, though the summer in the high north is not as warm as it is further south, the Sun is out for far longer in the summer days; this year on the solstice in Stockholm, Sweden, the sun rose at 3:31am and set at 10:09pm, making the day more than eighteen and a half hours long. Perhaps then, this is more about light than heat. What is being illuminated now? What can you get a good, long, look at now?

I draw the darkness after me. This is not frightening, or terrible; it is just night, and night is normal and natural. You need not fear if the light does not last. For though it may not seem it I always come again. Sure as sunrise, don't they say?

Enjoy me while you can. This also, is not terrible, nor a threat; simply a reminder to appreciate what you have while you have it. Your day in the sun is now. Live it, enjoy it, bask in it. Let yourself be warmed.

An Introduction to Viking Mythology, by John Grant;

and surprisingly enough, Wikipedia is pretty thorough on Norse myth.
Posted by Thalia at 9:41 PM

Labels: Goddess of the Week, Sunna

A perfect reminder to live in the moment.

I agree -- I think Her message is "Enjoy me while you can!" Summers are all too short.

I love the energy in that picture!

You know what? I really really enjoy your work - both art and writings - This is in general and not just specific to this week :)