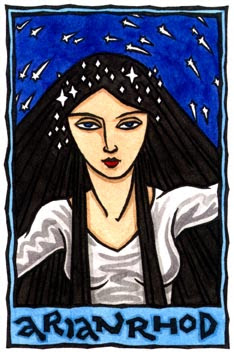 Arianrhod comes up for the second time, the last time being exactly three months ago, on December 29th.

It's a little hard these days to pin down what the Goddess Arianrhod is about, as She's mainly known from the Mabinogion, the Welsh collection of tales written down in the medieval period; though the tales certainly contain earlier legends, they are told within a Christian framework, and so the Divinity of the characters has been ignored and downplayed.

Her name means 'Silver Wheel' or 'Silver Disk'; this has usually been taken to mean She is a Moon Goddess. To me the idea of the Moon rolling across the sky has never made sense, since it obviously doesn't revolve in that manner, so instead I tend to interpret Her as a Goddess of the stars, which do appear to turn in the sky. Additionally in Welsh tradition the constellation of the Corona Borealis, the Northern Crown, is called Caer Arianrhod, the Castle of Arianrhod, so She does have some connection with the stars.

The tale in the Mabinogion is that Arianrhod is the mother of Dylan and Lleu; Dylan, the Sea-God, jumps into the Sea shortly after birth, but Lleu, or what would become Lleu, is a sort of shapeless blob that Her brother Gwydion takes and squirrels away to raise. Now, the circumstances of the birth are a bit unusual--Arianrhod is being considered for a position (that of Math's 'foot-holder', whatever that means) that requires virginity; but when magically tested She abruptly gives birth. And ever after, according to the tale, Arianrhod in Her shame and anger adamantly refuses to acknowledge Lleu, Who of course grows up to be a handsome lad. To this end She proclaims He will not have a name or arms unless She give them; these constraints or curses are of course cleverly overcome, as usual in fairy tales. The third curse or constraint requires a bit more of a workaround, but is also overcome: that Lleu will not have a wife from any race of the earth. This Gwydion and Math circumvent by creating a woman out of flowers, the owl Goddess Blodeuwedd, Who later betrays Lleu, setting Him up to be grievously wounded; He is eventually healed whole by the magicians.

It is all fairly convoluted, and the version that has come down to us very much feels like it has some pieces missing. For one, there is evidence that in earlier versions Gwydion, Arianrhod's brother, is the father of Her children. Which sounds horrible by regular human standards; but of course in myth it is a different thing, and may mean no more than that the two were considered equals, like Geb and Nut of Egyptian myth. But it is hard to tell from here. At any rate, I could never understand the why of Arianrhod's obsessive denial of Her son Lleu, and it always felt to me that there was a key circumstance left out. When I thought of Her as the victim of rape and violence by Gwydion, though, things fell right into place (see my version of Her tale here). But, you know, that's just one idea.

Still, intuition is what we have. And I'd argue that intuition is especially appropriate and accurate when used to understand myth, which, though there are of course cultural factors that come into it, does basically come down to a sort of shared dreaming.

So I think that this week may involve sticking to your guns about something, even if you do not wish to disclose your reasoning at this time, and even if you know it will make no sense to the people around you. You do not have to justify anything, and the others are not after all owed an explanation. If you wonder if you have the right, think of it as a boundary that you set with good reason, the workings of which are really no one's business. You need neither apologize nor explain. You have the right to do what is necessary in this situation, and keep the private private. Or it may be that you are being advised that the best course of action is to bide your time this week.

Also intuition may play a part in putting the pieces of a story together. This week may well see you figuring out a missing part of an old (or new) story such that it finally makes sense. Perhaps new information comes up; or, maybe, you figure it out on your own. What incomplete stories have you been holding within you?

And finally, Arianrhod as a Goddess of the revolving northern sky reminds us that the center is a place of quiet and restoration. Finding that center within yourself, perhaps through meditation or other grounding practices, will help you make sense of things this week more readily.

So, then, what does She say?

Her dark hair is everywhere. It is the black space between the stars.

I am Darkness who gives birth to the Bright One.

I am all darkness, and yet all the little pinpricks that shine through nevertheless; and any astronomer will tell you that darkness isn't really dark. The further you go, the more stars you find; there are layers upon layers of light. Though they are too faint for your eyes, still they are there if you know how to look. Seek them out. Seek out the light that makes up the dark. Bless the blades of grass as they push themselves out of the dark earth this spring, as innumerable as the stars. You are surrounded by light, by blessings, if you will look. This is a good time, right now, very positive. The stars are aligning, as they say. Take notice.

And remember it all works out.

What do you think? What does your intuition say? Those of you who are familiar with Arianrhod's story, have you ever wondered why She was so determined to deny Lleu?

References: The Oxford Dictionary of Celtic Mythology, by James McKillop.
Posted by Thalia at 5:24 PM

Sit tight and maintain boundaries, without the need to explain myself--that cuts right to the heart of the swirlings in my life this week.
Also, indeed new aspects of past hurts have been revealed.
I think looking for the stars amid Arianrhod's hair sounds like good medicine.

I always assumed she was still really, really pissed off at her forced motherhood. Dylan didn't force her to confront that on a regular basis and Lleu did. She didn't want to condone it and make it "okay" by acting as a mother.