My dear darling Sir Isaac Mewton has been feeling rather poorly lately. We took him to the vet today, where everything checked out okay save for a bit of telltale jaundice visible in his third eyelids (though the vet pointed out his gums were perfectly pink, meaning that whatever it is it is not very bad so far), meaning something's up with his liver. I believe that could be something very minor or the beginnings of something very nasty; I have so far resisted the urge to google 'cat liver jaundice disease' as that will not help anything and only make me feel worse. He is not very sick, at present, but enough that he is off his game, which is usually a very fine one indeed. They took blood today and I'm waiting on the results, which will come in tomorrow.

Here he is, in all his X-TREME glory and handsomeness: 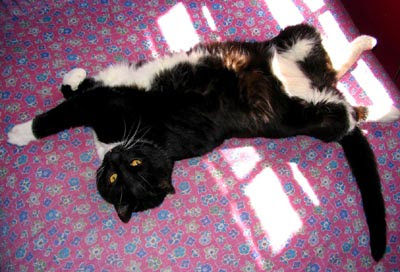 Anyway, I'd really appreciate it if any of you who feel up to it could send some nice gentle but thorough healing energy his way. I've been petitioning Bastet left and right myself.

UPDATE: Just heard from the vet. He told me a bunch of technical stuff (which I wrote down) but bottom line is it's not FIP, feline leukemia, or FIV, which is all good. But something is clogging up or cutting off the flow in his bile ducts, which could be anything from 'sludge' (the vet's word) to a tumor. So...

He's recommending an ultrasound, which will probably run about $350. Which we will do, but oh boy. So healing thoughts and wishes are still much appreciated, along with good prosperity vibes. Thank you all so much.
Posted by Thalia at 10:34 PM

I too will send prayers to Bastet with all the *gravity* that Sir Isaac Mewton deserves, as he is the *apple* of your eye. I hope his condition is something simple and temporary.

Thank you Debra. It is very much appreciated.

The legend is that Sir Isaac Newton is the man who invented the cat door, since he was sick of always having his work interrupted by the cat on the wrong side of the door.

I've been reading your blog for awhile & really enjoy it. I'm sorry to hear about Sir Isaac Mewton. He looks like my Pippin and we are all thinking good thoughts for you!

Oh look at your Pippin! Very marvelous, he is. And of course as a Took I very much approve of the name.

Thank you so much for the good thoughts!

Petitioning the Dark to go play somewhere else for a few more years.
You just keep avoiding google!

Yes, Poppy, quite a few more years. Thank you.

He is quite the handsome fellow!
All good thoughts going out to you and your kitty, and he will be in my prayers!

Yes, he is very, very handsome. Everyone who's ever met him has fallen in love with him at first site.

Thank you for the good thoughts and prayers, they are much much appreciated.