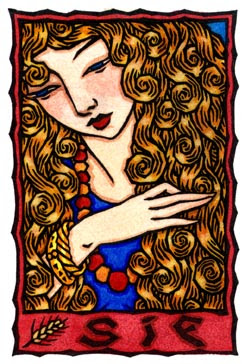 Sif's name means 'kinswoman' or 'relative'; it is related to the English word sibling, meaning 'brother or sister.' The meaning of Sif's name is a little more precise, however; it is the singular (and Her name is the only time the singular is used) of the plural Old Norse noun sifjar, which means 'relatives by marriage.'

Marriage, not blood. In the myth, Sif is the mother of the God of Winter Ullr; His father is never named, just said to be a frost-giant. Her second husband, then, and the one She was most associated with, is the famous Thor. It is always very carefully pointed out that Thor is Ullr's step-father, and Ullr Thor's step-son.

Which all has to do with the complicated ways the Norse defined types of kinship; as far as I can tell, and I'm looking at this, as ever, through a very feminist lens, this particular and careful distinction was a way of favoring the male line over the female. Because Ullr's mother married Thor, Ullr's father was discounted, to the extent that He has remained nameless in myth.

I suppose one might argue that maybe Ullr's father was never named because it wasn't a big deal, and it was more important to identify Him with Sif; I don't think the Norse thought like that, though. I don't know how old Sif is within the culture, and it may be that the relative by marriage aspect of Her is the main or original one.

On the other hand, it would seem that Ullr, Whose name means 'Glorious One' was once a very important and very old God in the Norse pantheon, though by the time the sagas &c. were written down He is only sparsely mentioned. He was, like His mother, said to be very very beautiful. And it would make sense that a Very Important God like Ullr might just have a Very Important Mother; so perhaps all that past glory of Ullr's might also indicate a greater past measure of glory for His mother. By Thor Sif did have a daughter, Þrúðr (Thrúdr), Whose name means 'Strength;' whether that reflects on the mother's or father's strength I don't know.

The thing is there just isn't a whole lot known of Sif, beyond that She had the gift of prophecy, and that story about Loki cutting off Her long golden hair; it has been assumed that because of said hair She may have Her origins in a fertility Goddess, specifically a grain Goddess.

And it does make sense that Sif, the Goddess of the Grain and its harvest, which happens in autumn, would give birth to Ullr, Winter.

Now, Her appearance this week may be just another note to add to the ongoing theme of harvest, going on in the Northern Hemisphere at this time; it would certainly be timely. And that may be what's going on in the background of things, in a sort of general sense.

But given all I just wrote above, I'm inclined to wonder about how autumn gives birth to winter; how one season transforms into the next. Samhain, after all, which is only a couple weeks away now up here in the north, is when autumn turns to winter, life into death; that moment of liminality, literally that threshold. It's not here quite yet, but Autumn is pregnant with Winter now; Life is pregnant with Death.

Autumn thoughts, I suppose. I'd pay attention this week, though. I know these are the usual questions asked at this time: What is dying? What is being harvested? What dies now so you will live through the Winter?

And questions of family, too, especially the chosen family (even if you are not the one who did the choosing), the in-laws, the stepchildren. I am tempted to expand it out to your chosen family, the friends you consider family; but I think the definition here is actually the narrower one, going by the precision implied in Sif's name.

Also, and this is fairly random but is nagging at me to let it come through, perhaps do some scrying this week. Not just because Samhain, or Beltaine, is coming, but because of Sif's status as seeress.

Let's see if She can offer any clarification:

I am Mother of Strength and of the hard hard Winter. Beautiful, glorious, formidable, ice cold Winter. Our word for Earth up here? Is Rind, the Frozen One. That is the first state of things, and it will be the last.

The warmth you would find you must make yourself. The warmth you must have to survive you must make yourselves. Make it between and among you. Do not be fooled by my beautiful golden hair, my maiden appearance, my thundering husband Who drowns out my voice. I know more than he does. True, it is not difficult. But my first husband, my first love, was a creature of the ice and frost.

My hair curls like the precious breath that comes from the warm mouths of you fragile fragile humans. Yet that breath is strong; unbreakable Gleipnir was made in part from breath, was it not? And that will only break at the end of the world.

Which is coming, and is here now, and has passed.

Goodness. What do you think?

The Category of Affinity (Mágsemð) in the Old Norse Model of Family Relations, by Fjodor Uspenskij

An Introduction to Viking Mythology, by John Grant
Posted by Thalia at 11:30 PM

Hmmm, beautiful telling, new stories of Sif I hadn't known. I sing the Wagner Norse heroines, always interested to earn more of the originals, thank you. Breath. It creates immense and long sung sound that changes all who hear it, Fragile, immensely powerful. Ice crystals, built of perfect balance , like sound and the breathe that births it..again simple fragile and immensely powerful things, ice crystals, a breath, a voice, a note. The strength lies in the balance, the respect of the fragile which gives back then great strength.
Also vibration, resonance. the resonance of the ice crystals researched, the slightest change, even of a word taped to a glass of water, changes the structure of the water within, the ice crystals created from it. Fragile simple things that change all by changing the resonance. The immense strength of resonance--not even the sound, the resonance it creates--that carries a Wagnerian voice for five hours, the greatest effort at the end. That heals the voice as it is being used, instead of wearing it out.
Thor thunders, her first husband was perfect balance and resonance, a snow's flake of cool kiss on the cheek. Only after could fire and metal's strengths come into life.
That is what I see.
Again, thanks utterly for this place.