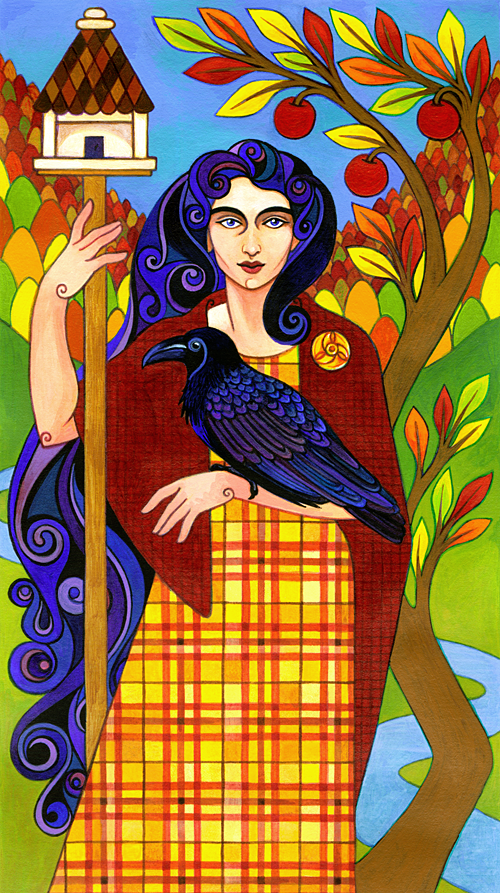 This is new art of Nantosuelta, a continental Celtic Goddess, Whose distinctive attribute is a little house (or temple) on a pole. That's been taken to mean She's a Goddess of happy domesticity; She can also be shown with apples (or other fruit or perhaps loaves of bread) or something that might be a beehive, so that does sound about right. Her name means either 'Meandering Stream' or 'Sunlit Valley', though given She is not usually shown with watery imagery I'm guessing the latter is more likely. Though who knows; that's just going by the depictions of Her that have survived the ages, of necessity an incomplete picture.

She is also quite often shown with a raven, which gives Her a darker aspect, as the raven is as far as I know always a symbol of death (or battle) in Celtic thought.

She was associated with the Celtic hammer-God Sucellos, and was his cult-partner (or one of them, depending on the region). He was Himself heavily associated with the wine harvest (and the center of Their worship was the wine-growing regions of France and Germany, especially the Moselle River valley); I thought an autumnal harvest scene was appropriate, with a burgundy-colored shawl to make reference to wine.

It's in acrylics and is something like ten inches tall; I've put it up on deviantArt as a print as usual if anyone's so inclined.

Done for the October Goddess by Request over on my Patreon.
Posted by Thalia at 7:35 PM

She is new to me -- love how Her hair mirrors the colouring of the raven!