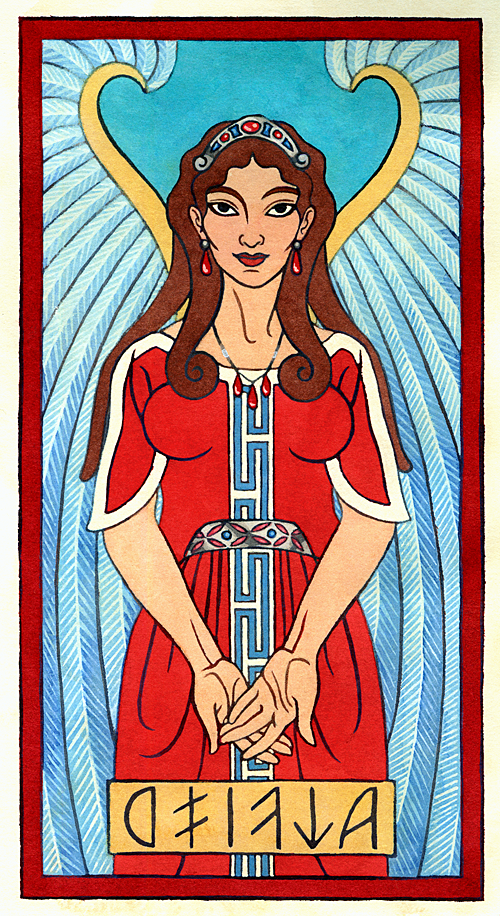 This is new work of Achvizr, an Etruscan Goddess or personification of some positive quality. She is depicted on several engraved mirrors, and is often found in the company of Turan, the Goddess of love. The first part of Her name may be related to an Etruscan word for 'Doctor', and She may have a connection with healing or health. Accordingly I have put Her in the colors associated in modern times with doctors and the medical profession (and gave Her blood-drop earrings and pendants).

The original is in colored india inks, using white gouache as a resist, which has been all washed off. Basically the technique is to paint the gouache where the outlines don't go, so that the outlines end up being negative space, which gives them the quality of line work found in say a wood cut or linoleum block print. It's definitely been a learning curve with this technique (the first time I tried it I scrubbed the gouache off too forcefully and took off much of the ink itself, while ruining the surface of the paper!) but I think I may (fingers crossed!) have gotten the hang of it, somewhat. Anyway I'm really very pleased with the result this time.

I've put this up on prints at my deviantArt site as usual, here. I mean, not that anyone besides (Etruscologist) Nancy T. de Grummond and me (and now you) have even heard of Her!
Posted by Thalia at 10:27 PM

I am so happy to see more activity on the Goddess Oracle. When will it be finished and published?

Yes, I've never heard of Her but am happy to make Her acquaintance! I always learn so much on your blog and other websites.